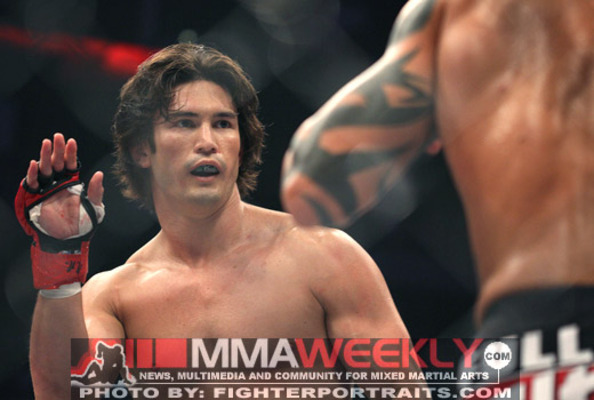 KJ Noons is ineligible for regional rankings due to inactivity.
Fighters must have at least one completed MMA bout in the past two years to be ranked.

Karl James Noons is a lightweight fighter currently signed to Strikeforce. He has competed in karate since the age of five. KJ competed in karate and kickboxing throughout his youth with much sucess. He has won multiple Sanshou middleweight championships as well as the 1997 under seventeen Kenpo Karate International black belt gold medal. His love of combat sports has kept him active in multiple disciplines at the same time.

A gifted boxer and kickboxer, Noons made his professional debut in 2002 and ran his record to 4-2 before debuting for Strikeforce in 2007. The ensuing streak of fights would redefine Noons in the eyes of many fans as not only a skilled striker but a potential top ten fighter in the lightweight division, after he defeated Nick Diaz and Yves Edwards, both of them by TKO in the first round under the now defunct EliteXC banner. The defeat of Diaz was a particularly impressive accomplishment, as Diaz had looked virtually impervious both before and after that bout, and Noons bloodied the Cesar Gracie product badly in the course of the stoppage. After Noons defeated Edwards, Diaz came into the ring and confronted him about a rematch. Diaz famously told Noons, "Don't be scared homie" which sparked a brawl. Noons was later stripped of the EliteXC title because he refused a rematch with Diaz.

In 2005, Noons arrived on the international MMA scene by winning Pride Fighting Championship’s audition as the best striker, but he was unable to come to terms with the promotion regarding a contract. An undeniably skilled fighter with hair-trigger reflexes, Noons has been criticized for his desire to pursue a professional boxing career at the same time as his MMA career. He has had difficulty coming to terms with more than one promotion, and as a result, has not competed in MMA on a consistent basis until recently. He has competed solely in MMA since 2009.

Since joining Strikeforce, he has gone 3-3. He started off strong with two wins over Conor Heun and Jorge Gurgel. Noons next lost a welterweight title rematch against Nick Diaz and a title eliminator against Jorge Masvidal. KJ picked up another win over Billy Evangelista at Strikeforce 37 but again lost at Strikeforce 39. He took on Ryan Couture at Strikeforce's final event.  Although the fight was very close, Noons would lose a split decision. He was still picked up by the UFC though, and was scheduled to fight Donald "Cowboy" Cerrone at UFC 160 for his first fight. He would lose by Unanimous Decision. He would pick up his first UFC win with a decision over George Sotiropoulos. He would follow that up with a performance of the night bonus for his first finish of Sam Stout. Fololwing his bout with Stout, Noons would be scheduled to face Daron Cruickshank at the Ultimate Fighter 20 season finale. The bout would go on to be ruled a no contest due to Cruickshank being unable to continue due to an eye poke.