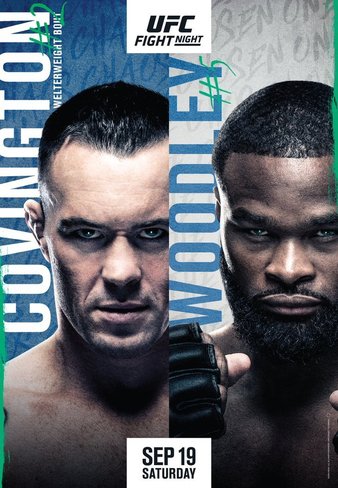 Covington vs. Woodley
Colby Covington, DEC
Colby via 5 rounds of domination as long as he doesn’t get knocked out in the first round, then his pace should get to woodley

Cerrone vs. Price
Donald Cerrone, SUB, R3
Cowboys superior everywhere but Price is VERY dangerous, my guess is they end up on the floor and cowboy subs him

Holland vs. Stewart
Kevin Holland, DEC
If Kevin wrestles Darren I think it could be an easy night for him but he should be okay on the feet too but think it’s better for him to wear on him

Espinosa vs. Dvořák
Jordan Espinosa, DEC
This is a 50/50 but I’ll take Espinosa, I wasn’t that impressed with Dvorak debuts

Bueno Silva vs. Borella
Mayra Bueno Silva, TKO, R3
Silva is superior everywhere and has a big strength advantage. Can see her getting the finish wherever or dominating.

Minner vs. Laramie
T.J. Laramie, SUB, R2
Should be TJ’s night as long as he defends those early submission attempts he should take over

Costa vs. Newson
Journey Newson, TKO, R3
Picking Newson because Costa tends to wind up on his shots and gas out after the first round but I’m not 100% sure with this fight. Potential fight of the night.

Ewell vs. Rivera
Andre Ewell, DEC
Ewell should be too quick and accurate on the feet for this guy.

Nam vs. Rivera
Tyson Nam, DEC
Nam throws single shots and doesn’t really leave himself open for takedowns, also the better striker too. He should win this as long as he lets his go because Rivera looks to make everything a grappling match

Covington vs. Woodley
Colby Covington, DEC
My ******* god do I despise Covington, but He's goona win this fight, I really do believe. Woodley hasn't shown me anything lately to make me change my mind.

Espinosa vs. Dvořák
David Dvořák, DEC
Dvorak is back!

Tapology members can make predictions for upcoming MMA & Boxing fights. UFC Fight Night is still open for picks to be entered. Create an account to make your predictions.