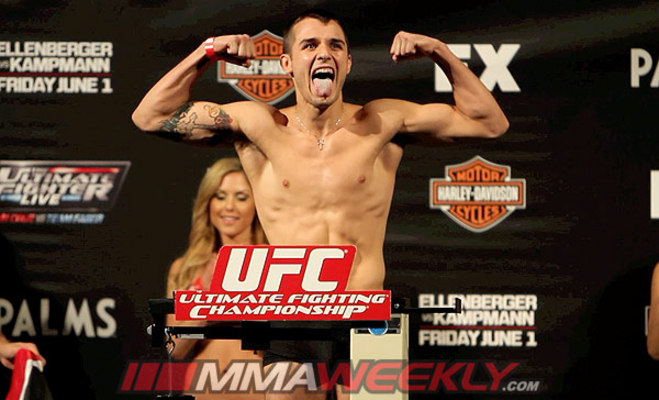 Fighting for a major organization has made Myles Jury ineligible for regional rankings.

Originally a native of Hazel Park, Michigan, Myles 'The Fury' Jury is best known for his two stints on 'The Ultimate Fighter.' Jury originally was a cast member on TUF 13, but was forced to withdraw during the first episode after suffering a knee injury. Jury would return as a lightweight for the 15th season of the show, and would win his way into the TUF house by defeating Akbarh Arreloa by decision. He would lose his first fight in the house, however, to eventual finalist Al Iaquinta. Prior to competing for the UFC, seven of his nine fights were contested in King of the Cage in the Great Lakes area. The Alliance MMA product is known as a finisher, as none of his ten wins have gone the distance (six by submission, four by knockout). Jury is a Brazilian Jiu Jitsu black belt under Don Richard.

Jury would fight Chris Saunders at the season finale, and would defeat him by first round guillotine choke. He next fought Michael Johnson at UFC 155. In a fight where Jury was the heavy underdog, he impressed by winning a very dominant decision. Jury would keep his undefeated streak alive when he fought another TUF alumni Ramsey Nijem at UFC on Fox 7. After a first round of back and forth grappling Jury would TKO Nijem in the second round.He would rattle off two more wins one over TUF winner Mike Ricci and then at UFC 171 when he beat Diego Sanchez by unanimous decision.

Following Jury's bout with Sanchez, he was briefly linked to a bout with Abel Trujillo at UFC Fight Night 44, however both fighters would sustain injuries and be removed from the card. In the UFC's return to Japan at UFC Fight Night 52, Jury was slated to face hometown favorite and Pride Fighting superstar, Takanori Gomi. Jury would go on to win the bout via TKO in the first round becoming the first person to stop Gomi via strikes.

The win against Gomi would bring Jury's overall record to 15-0 and 6-0 in the UFC. Angered by Jury's post-fight statements regarding Diego Sanchez, Donald Cerrone (Sanchez's training partner) asked and was granted a fight with Jury at UFC 182.