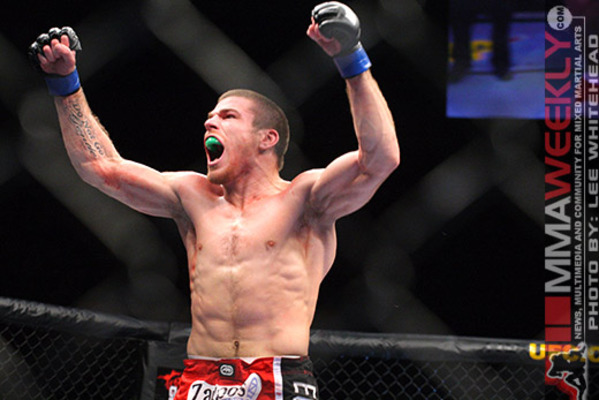 Fighting for a major organization has made Jim Miller ineligible for regional rankings.

An accomplished high school wrestler and Brazilian Jiu-Jitsu practitioner, Jim Miller entered professional MMA competition in 2005, running his record to 5-0 before running into fellow New Jersey native and future UFC Lightweight Champion Frankie Edgar in Atlantic City, where he lost a competitive decision. Following the loss, Miller bounced back with eight straight victories—including two in the UFC—defeating Matt Wiman and David Baron along the way. After suffering the second defeat of his career to Gray Maynard at UFC 96—again by decision—Miller went on a seven fight winning streak, defeating notable lightweights such as Gleison Tibau, Mac Danzig, and Mark Bocek to establish himself as a contender in the UFC lightweight division. However, his streak was eventually halted by current UFC Lightweight Champion Ben Henderson after losing via unanimous decision. He has since gone 1-1, with a submission victory over Melvin Guilard and a submission loss to Nate Diaz, the first stoppage loss of his career.

Although he has made strides in recent camps with his boxing technique, Miller—like his older brother, Dan—is predominantly known as a wrestler and Brazilian Jiu-Jitsu fighter, often dragging his opponents down to the matt in an attempt to look for a submission or grind out a decision. More than half of his career wins have come by way of submission.

Miller looked to get back to his winning way when he took on Joe Lauzon at UFC 155. In a battle between two fighters of very similar styles, he was able to come out on top in their "Fight of the Night" performance. Although he had Lauzon badly hurt and bleeding profusely after the first round, he was unable to finish his opponent and won a unanimous decision. Miller was then submitted in the third round in an upset loss to to Pat Healy at UFC 159. However, after Healy tested positive for marijuana in his post fight drug test, the loss was overturned to a no contest. Miller would pick up his next win against Fabricio Camoes at UFC 168 finishing the Brazilian in the first round by armbar. He would win a second straight by submission with a win over Yancy Medeiros.

On 16 July, Miller faced Donald Cerrone in the main event of UFC Fight Night 45. The fight opened with an explosive 5 minutes; with good exchanges from both fighters. Round 2 opens with Cerrone landing several kicks. These took a toll of Miller who looked hurt; in perhaps a desperation attempt Miller goes for a takedown and is stuffed by Cerrone. Cerrone landed a beautiful head kick severally rocked Miller. At 3:31 the fight was stopped via KO.