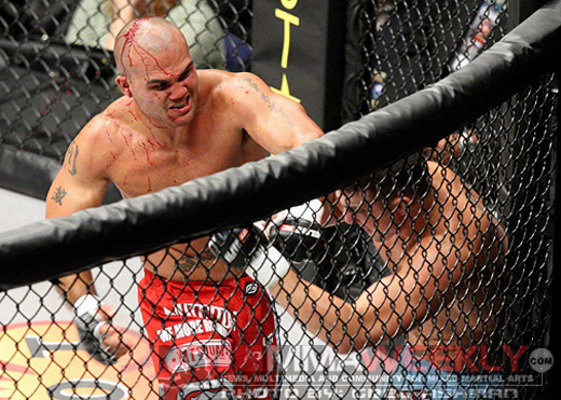 Fighting for a major organization has made Robbie Lawler ineligible for regional rankings.

Iowa native Robbie Lawler is best known as an exciting fighter with one punch knockout power. Initially a welterweight, Lawler picked up wins over Aaron Riley, Steve Berger, and Tiki Ghosn, all in the UFC. It wasn't until his eighth fighter against Pete Spratt where he lost, due to injury. After beating Chris Lytle at UFC 45, Lawler was infamously knocked out by Nick Diaz at UFC 47, which would mark his final fight as a welterweight.

Lawler would then lose by submission to Evan Tanner in his middleweight debut. After this fight, he would win three straight on the regional circuit (two wins over Falaniko Vitale), until losing by submission to Jason 'Mayhem' Miller. After the loss to 'Mayhem,' Lawler would win five of his next six fights (only suffered a no contest to Scott Smith after an inadvertent eye poke), and captured the Elite XC middleweight belt. Lawler also made his only appearance in Pride FC during this run, scoring a memorable flying knee KO over Joey Villasenor at Pride 32 in Las Vegas.

He met Jake Shields in his Strikeforce debut, but lost early as he tapped out to a guillotine choke. His next fight was against vicious Dutch kickboxer Melvin Manhoef. After eating many low kicks from the Dutchman, Lawler would deliver a hail mary shot that knocked Manhoef out cold. The knockout would go down as Sherdog's 2010 Knockout of the Year. After defeating Manhoef, Lawler would gather a lackluster 2-4 record in the remainder of his Strikeforce career, with two highlight reel knockouts, including a flying knee KO over Adlan Amagov, and a brutal knockout over former Olympian Matt Lindland.

After suffering a loss to Lorenz Larkin in his final Strikeforce bout, he would make the move to the UFC, and would compete there as a welterweight. Josh Koscheck would be Lawler's first opponent in the 170 pound division since his fight with Nick Diaz, and surprised many when he knocked Koscheck out in the latter part of the first round. Lawler would then be slated to fight former Strikeforce champ Tarec Saffiedine who would pull out because of an injury, and was later scheduled to fight fellow striker Siyar Bahadurzada at UFC on FOX 8. After Bahadurzada suffered an injury and had to drop out of the fight, Lawler faced another former Strikeforce fighter, Bobby Voelker. After dominating the first round with fast, hard strikes, Lawler knocked Voelker, known for his ability to take hard shots, out with a perfectly timed head kick less than 30 seconds into the second round. After a few more follow up punches to the defenseless opponent, the referee stopped the bout. Robbie Lawler has now won two UFC fights in a row via devastating knockouts.

Lawler formerly trained out of Matt Hughes' H.I.T. Squad in Granite City, Illinois, but recently made the move to American Top Team for his return fight to the UFC. Lawler is a fighter who is never in a boring fight, and will be remembered by MMA fans for his punching power and aggressive style.

Lawler would pick up his 3rd straight win since returning to the UFC at UFC 167. In a close fight he would edge out rising prospect Rory MacDonald in a Split Decision victory. With GSP vacating the weltwerweight strap it Lawlor would get his shot at the belt against Johny Hendricks at UFC 171. It was a back and forth fight for the first four rounds with Lawler almost finishing Hendricks, however Hendricks would take over in the fifth round and secure the decision as well as the title. Lawler would walk away with a Fight of the Night bonus for his efforts.

On 27 July, Lawler and Matt Brown at UFC on Fox 12. For most of the fight Lawler and Brown we very entertaining fight. The 2nd and 5th rounds were arguably the best, as Brown went to really push the fight, winning the former round. In the end Lawler won by unanimous decision (49-46, 48-47, 49-46).

On 30 July it was announced that Adidas signed an endorsement deal with Lawler, making him the first UFC fighter to be sponsored by Adidas.

On December 6, 2014 Robbie Lawler defeated Johny Hendricks via split decision (49-46, 48-47, 47-48) to avenge his loss and to capture the UFC welterweight title. At the UFC 181 post-fight press conference, it was announce that it was uncertain whether and immediate rubber match will take place against Johny Hendricks, or a rematch against top contender Rory MacDonald.