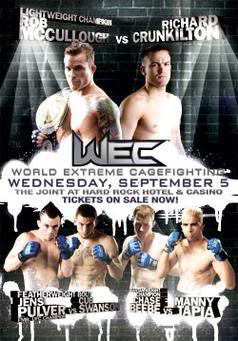 Although it did not showcase the growing star power of promotion champions such as Carlos Condit and Urijah Faber, WEC 30 did feature two title fights, in the bantamweight and lightweight divisions, respectively. Chase Beebe defended his Bantamweight Championship against Rani Yahya, while Rob McCullough retained his own belt with a first-round knockout of Richard Crunkilton.

Former UFC Lightweight Champion Jens Pulver was set to make his promotional debut on this card, but was forced to withdraw from the fight due to a knee injury.