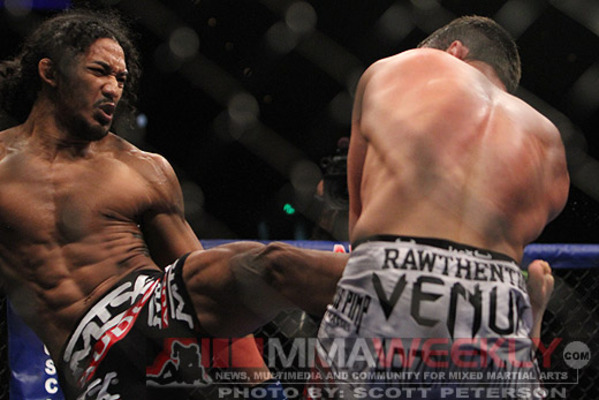 Fighting for a major organization has made Benson Henderson ineligible for regional rankings.

Fighting out of the little-known MMA Lab in Glendale, Arizona, Ben “Smooth” Henderson first burst onto the international MMA scene when he submitted dangerous striker Anthony Njokuani in his WEC debut in 2009. Since that fight, Henderson has been extraordinary at 155 lbs., winning the WEC Lightweight Championship over Jamie Varner in 2010 and defending it with a first-round submission of Donald “Cowboy” Cerrone the same year.

Henderson has only been defeated twice since turning professional in 2006, and has finished more than 90% of his professional fights. A gifted collegiate wrestler with the grappling and striking power to back it up, Henderson’s greatest attribute may be his never-say-die attitude, which was on full display during his 2009 Fight of the Year candidate against Donald Cerrone, for the interim WEC Lightweight championship. During that fight, Henderson was damaged with punches and kicks and managed to escape several close submission attempts from Cerrone to grind out a close Unanimous Decision victory over five rounds.


Henderson next unified his title with Lightweight Champion Jamie Varner, that saw Henderson win by submission in the third round. He then had a rematch with Donald Ceronne, with this fight being much different as Henderson won by guillotine choke in the first round. Henderson was then scheduled to face Anthony Pettis. In his match with Henderson, Pettis was able to get the better of "Bendo" several times with his kickboxing, and avoid being taken down by the champion's wrestling. After four close rounds, and the fight seemingly hanging on the fifth rounded, Pettis surprised Henderson by leaping of the kick, and performing his spectacular "Showtime kick" which would lead to him winning the round and the fight. The matchup was the last ever held by the WEC, and celebrated one of the best fights of 2010.

Henderson's debut in the UFC following its acquisition of the WEC was a successful one, as he ground out a tough decision over Mark Bocek in front of 55,000 at UFC 129. The win helped ensure some measure of job security in the UFC's highly competitive 155-pound division. Henderson would follow this win up with Unanimous Decision victories over Jim Miller and Clay Guida securing himself a title shot against champion Frankie Edgar. Henderson won a Unanimous Decision over Edgar in the Fight of the Night but the fight was close enough to allow Edgar an immediate rematch. The rematch was even closer as Henderson won by Split Decision this time retaining the belt. He would face Nate Diaz in his second title defense and would dominate him for all 5 rounds on his way to a Unanimous Decision victory. The key to Henderson's victory was him repeatedly kicking, and even punching Diaz's leg, that his boxing stance left him open to. He was also able to avoid the challenger's brawling punches and celebrated submission game.

Henderson would face Gilbert Melendez next, who was Strikeforce's last lightweight champion. In a close fight Henderson would successfully defend his title for the third time beating Melendez by Split Decision. He would look to make his fourth straight title defense when he faced off against Anthony Pettis in a rematch. However Pettis was able to lock an armbar on him in the first round and beat him for a second time taking the belt from him again. He would get back on the winning track when he beat Josh Thomson by Split Decision in the Main Event at UFC on FOX 10.

On 7 June, 2014, Henderson faced Rustam Khabilov at UFC Fight Night: Henderson vs. Khabilov. Henderson won via RNC in Round 4 at 1:16. Making this his first finish in four years. For this victory Henderson won the Performance of the Night fight bonus. However the former champion would lose to Rafael dos Anjos by TKO for the first time in his career, Henderson was clearly upset with the stoppage as he thought he was fine to continue. But Big John McCarthy stands by his decision and said that he saw him go unconscious. He would lose his next fight in a rematch with Donald Cerrone by decison.

He would bounce back with two wins stepping up to welterweight over tough opponents Brandon Thatch and Jorge Masvidal. Following the wins Henderson decided to test the free agent market and would actually end up signing a deal to fight with Bellator.