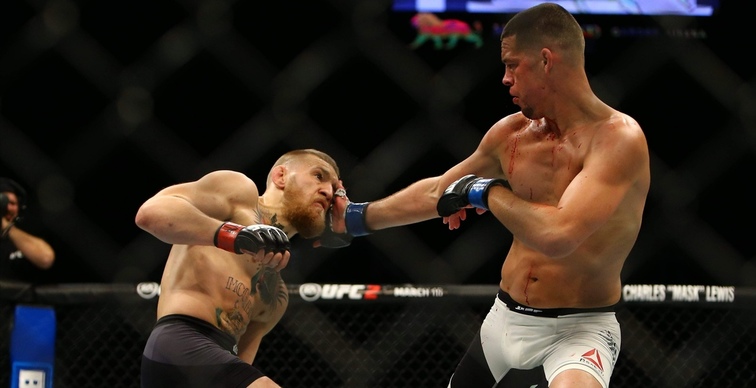 Fighting for a major organization has made Nate Diaz ineligible for regional rankings.

UFC lightweight Nate Diaz, the younger brother of Nick Diaz, first began competing in mixed martial arts on the professional level in 2004 in the California-based WEC promotion. After running his record to a respectable 5-2, Diaz caught his big break when he auditioned for a spot on The Ultimate Fighter 5, eventually competing in and winning one of the most stacked tournaments in series history in 2007. After defeating Manny Gamburyan at the live Season 5 Finale, Diaz defeated Junior Assuncao (guillotine choke), Alvin Robinson (triangle choke), Kurt Pellegrino (triangle choke), and a close split decision over Josh Neer in 2008.

A popular and controversial lightweight competitor—similar to his older brother in that respect—Diaz combines an aggressive boxing game with an experienced and versatile submission assault, and, unlike his brother, the majority of his wins have come by way of submission. He has elicited tapouts from the aforementioned fighters, along with Melvin Guillard, throughout his UFC career. Diaz exhibits swagger inside the cage, a warrior mentality, and the endless gas tank that seems to be a Diaz family trait.

Diaz briefly tried his luck at welterweight, pounding out Rory Markham and submitting Marcus Davis and earning fight of the night honors in his fight with Davis. Diaz then dropped two in a row to Dong Hyun Kim and Rory MacDonald. He would then drop back down to the lightweight division, putting on an impressive run of victories. Diaz won submission of the night honors with an armbar over Takanori Gomi, fight of the night honors in his war with Donald Cerrone and then submission of the night for choking out Jim Miller who had never been finished. With the impressive string of wins he earned himself a title shot against Benson Henderson. However Diaz would fall short in his title attempt after being dominated all 5 rounds by Henderson.

Diaz would next welcome Josh Thomson back to the UFC for the first time since 2004. Diaz would get rocked with a head kick in the second round and was finished by TKO for the first time in his career. Diaz said before the fight he plans to move back up to 170 pounds but would take his next fight at 155 against Gray Maynard. This would be the third time the two would fight and was the Main Event of The Ultimate Fighter 18 Finale. Diaz would seal the deal on the trilogy finishing off Maynard with punches in the very first round earning himself another bonus in the process for Knockout of the Night. It would be Nate's 11th fight night bonus in his UFC career.

After a year long layoff Diaz would return to face Rafael dos Anjos at UFC on Fox 13.  During the build up to the event, Nate would miss the media day for the event, publicly criticize the new deal between Reebok and the UFC, as well as missing weight for the fight. It appeared as if he was doing everything he could to get cut from the promotion, and his performance against Dos Anjos would look to help his cause as Diaz would lose the fight by Unanimous Decision.  Still, despite all of this, Diaz would remain under contract with the UFC.

Following his loss to dos Anjos, Diaz took a year hiatus.  After his hiatus, Nate Diaz made his return at UFC on FOX 17 against Michael Johnson; which would end in a Unanimous Decision victory for Diaz.  After the victory, Diaz would challenge Conor McGregor in a swear laden promo which would get heavily censored by FOX.

The fight against McGregor got to be reality when Nate Diaz stepped in as a late replacement to fight Conor McGregor at UFC 196 due the withdrawal of Raphael Dos Anjos caused by injury (broken foot) 10 days before to the event.

Nate Diaz would upset the world at UFC 196 when he submitted Conor McGregor in the second round via rear naked choke. He famously stated in the post fight interview: "I am not surprised MFs"

The UFC wanted the rematch to happen on their biggest event up to that time at UFC 200 but contract negotiations with Conor McGregor did prevent the fight from happening on that event.

They got to terms and it got rescheduled to be the main event of UFC 202 in Las Vegas. The fight went all five rounds and ultimately Nate Diaz lost via majority decision.

Nate went on another hiatus from the sport only this time it would last 3 years before he would return to the promotion. Nate Diaz fought against Anthony Pettis on the co main event of UFC 241. He won the fight via unanimous decision and famously called out Jorge Masvidal on the post fight interview who also was present at the venue.

Nate Diaz later went on to further promote the fight against Masvidal as he stated on the post fight press conference that he wanted to defend his BMF title against Jorge Masvidal. Nate encouraged the UFC to make an actual BMF belt.

Nate Diaz will face Jorge Masvidal on the second of november at UFC 244 as the main event. The fight will be hosted in Maddison Square Garden, NY. The UFC confirmed that it will be for the specially created BMF belt.

Episode 12 Diaz def. Gray Maynard by Guillotine Choke at 1:17 of Round 2

The Ultimate Fighter 5 Finale Diaz def. Manny Gamburyan by TKO (Shoulder Injury) at 0:20 of Round 2