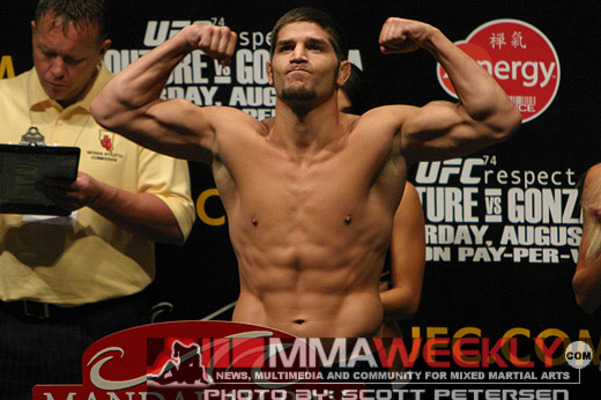 Patrick Cote is ineligible for regional rankings due to inactivity.
Fighters must have at least one completed MMA bout in the past two years to be ranked.

Patrick Cote is one of Canada's most talented mixed martial artists. He debuted in Victoriaville, Quebec, Canada in 2002, winning five straight fights in the fight-savvy province and winning the TKO Light Heavyweight Championship along the way. Cote was invited to join the UFC in 2004, where he gamely fought Light Heavyweight Champion "The Huntington Beach Bad Boy" Tito Ortiz on short notice in the main event of UFC 50. Cote lost a unanimous decision, and would go on to lose his next three fights with the promotion before getting his first UFC win in 2007. Starting with that February victory over Scott "Hands of Steel" Smith, Cote defeated three other fighters in the UFC, including Kendall "Da Spyder" Grove and Ricardo "Cachorrao" Almeida, en route to a shot at UFC Middleweight Champion Anderson "The Spider" Silva in 2008, which Cote lost after injuring his knee in the third round.

Cote served in the Canadian Armed Forces prior to joining the UFC. During his service he completed a six month tour of Bosnia. Cote credits the army with helping him develop his mental toughness. Cote is a very powerful striker, though his defining characteristic may instead be his toughness and ability to absorb punishment, as he has never been knocked out.

After a submission to Alan "The Talent" Belcher at UFC 113 and a decision to "Filthy" Tom Lawlor at UFC 121 which gave him three straight losses, Cote was then released from the UFC and forced to fight outside the promotion for the first time in 4 years. Cote would go on to win his next 4 fights to extend his record outside of the UFC to an undefeated mark of 13-0. The 4 wins had the UFC calling Cote's number yet again as he filled in for Rich "Ace" Franklin to take on Cung Le at UFC 148. Unfortunately for Cote, Le would hand him his 4th straight UFC loss via unanimous decision. In what was surely to be Cote's last and final shot to stay in the UFC, he was booked to take on fellow striker Alessio "Legionarius" Sakara at UFC 154 on November 17, 2012. The bout ended up a DQ win for Cote, after multiple punches to the back of the head from Sakara. A rematch was supposed to take place at UFC 158, but after Sakara pulled out with an injury Cote dropped down to welterweight and faced "Vicious" Bobby Voelker at the event. Cote won his welterweight debut via unanimous decision.

On June 14, 2013, it was announced that Cote would be coaching The Ultimate Fighter: Nations Canada vs. Australia against Kyle "KO" Noke  The reality show is expected to debut in early 2014.  The fight for Noke would happen at UFC Fight Night: Bisping vs. Kennedy on April 16th, 2014. Cote would pick up the Unanimous Decision for the win.

The Ultimate Fighter 4 Finale Travis "The Serial Killer" Lutter def. Cote by Armbar at 2:18 of Round 1