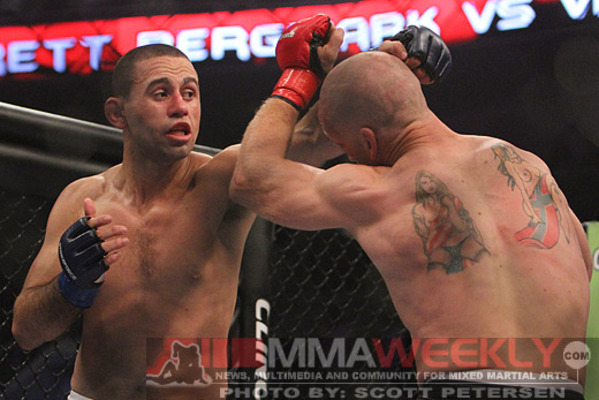 Vagner Rocha is ineligible for regional rankings due to inactivity.
Fighters must have at least one completed MMA bout in the past two years to be ranked.

Vagner Rocha was born on 6 June, 1982 in Rio de Janeiro, Brazil. Rocha is currently competing in the Lightweight Division of the UFC.

Rocha began his MMA career in 2009, where he competed in regional promotions throughout Brazil.

Rocha is currently signed with the UFC. Rocha opened his own gym called the Vagner Rocha Martial Arts in Pembroke Pines, Florida, where he fights out of.

Vagner made his UFC debut on 11 June, 2011 against top contender Donald Cerrone at UFC 131, replacing an injured Mac Danzig. He lost the fight via unanimous decision after being dominated for three rounds.

In his second UFC bout Rocha defeated Ultimate Fighter alumni Cody McKenzie on 17 September, 2011 at UFC Fight Night 25 by submission due to a rear naked choke in the second round.

Rocha was expected to make his featherweight debut against Mike Brown on January 15, 2012 at UFC on FX 1. However, Brown was forced from the bout with an injury. Rocha instead made his featherweight debut against Jonathan Brookins on 15 February, 2012 at UFC on Fuel TV 1. He lost the fight via KO in the first round. After the loss to Brookins, Rocha was subsequently released from the promotion.

After being released from the UFC Rocha began fighting with Fight Time promotion where he won the Lightweight Division.

Rocha faced Mike Bruno on 2 November, 2012 at Fight Time 12. Rocha won the fight by submission in the second round.

Rocha faced Randy Barroso on 23 August, 2013 at Fight Time 16. Rocha won the fight by submission in the first round.

On 20 April, 2014, it was announced that Rocha would return at UFC 172 to replace Yancy Medeiros, who shifted in the card to face Jim Miller, against Joe Ellenberger. However, Rocha suffered a last-minute training injury and the bout was removed from the card.