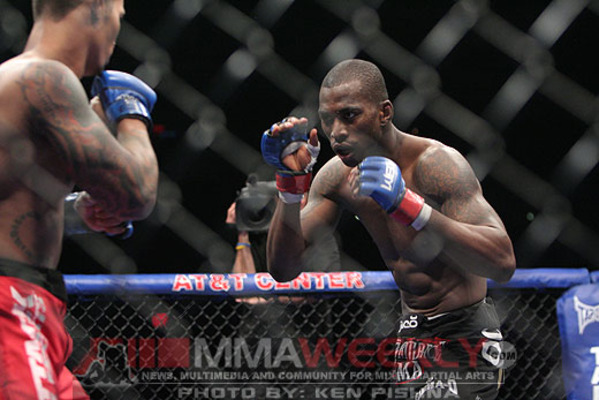 Njokuani was born 1 March, 1980 is Lagos, Nigeria. His family immigrated to the US in 1983, finding residence in Garland, Texas. Njokuani began training in Martial Arts at age 17 and MMA at age 21. He has a younger brother who is also a professional MMA fighter - Chidi Njokuani.
Njokuani has fought in the WEC earning a "Knockout of the Night" honours 3 times consecutively. He is currently fighting for the UFC in the Lightweight division.

In October 2010, the WEC merged with the UFC. As part of the merger, all WEC fighters were transferred to the UFC.

In his UFC debut, Njokuani faced touted prospect Edson Barboza on 19 March, 2011 at UFC 128.He lost the fight via unanimous decision, but the bout won the Fight of the Night bonus.

Njokuani fought Andre Winner on July 2, 2011 at UFC 132, winning via unanimous decision (30-27, 30-26, 30-26).UFC commentator, Joe Rogan, called it Njokuani's best performance of his career. With this performance, Njokuani became the sixth fighter to land over 100 significant strikes in a single bout.

Njokuani was expected to face Paul Taylor on 5 November 5, 2011 at UFC 138. However, just days before the event, Taylor pulled out of the bout citing an injury. With no time to find a suitable replacement the bout was scrapped.

Njokuani was expected to face Ramsey Nijem on 30 December, 2011 at UFC 141. However, Nijem was forced out the bout with an injury and replaced by Danny Castillo. He lost the fight via split decision.

Njokuani faced debuting Strikeforce fighter Roger Bowling on 20 April, 2013 at UFC on Fox 7. He won the fight via KO in the second round.

A bout with Paul Taylor was scheduled for the third time and was expected to take place on 26 October, 2013 at UFC Fight Night 30. However, Taylor was forced to pull out of the bout once again with another injury and later retired. Taylor was replaced this time by Al Laquinta. On 24 September, Njokuani also pulled out of the event with an injury and was replaced by Piotr Hallmann.