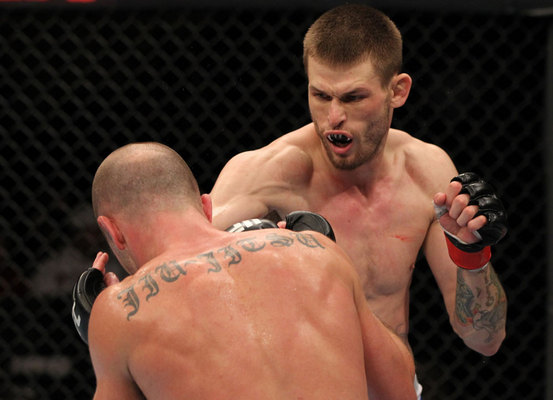 Fighting for a major organization has made Tim Means ineligible for regional rankings.

Tim Means began his MMA career in 2004 fighting for smaller promotions to a 3-2 record. His 2 losses would come at the hands of future UFC fighters Spencer Fisher and Luke Caudillo. Tim would then have to take some time off for a prison sentence that may have helped turn his life around. He would return to the cage in 2009 for the King of the Cage promotion and rattle off 6 wins in a row by 1st round finishes. Means suffered a submission loss to Jamie Jara, following up that fight with a win and a draw.

Means would then receive a title shot for the junior welterweight belt against Bobby Green. He would win the belt via TKO in the 2nd round and then go on to defend that belt 4 times. He would also get a shot at the lightweight title in his last fight for the King of the Cage promotion defeating Tye Brown to win his second belt for the promotion.

The UFC took notice and signed this rising star and matched him up against Bernardo Magalhaes in his first fight. He would win by Unanimous Decision and follow that up with a 1st round TKO over Justin Salas. He was scheduled to fight Abel Trujillo on the UFC 151 card that ended up being cancelled. They rescheduled the fight for the stacked UFC on Fox 5 card. However in a freak accident Means fell down and the sauna and TKO'd himself so this bout was canceled as well. He now looks to get back in the cage to welcome Strikeforce & Bellator vet Jorge Masvidal at UFC on FOX 7.