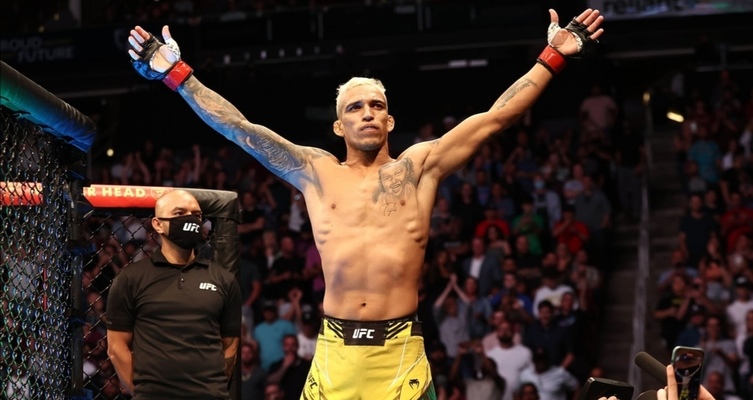 Fighting for a major organization has made Charles Oliveira ineligible for regional rankings.

The charismatic and remarkably talented "do Bronx" Charles Oliveira burst onto the scene in 2010, where he was arguably the UFCs breakthrough fighter of the year after scintillating back-to-back wins over Darren Elkins and the heavily favored Efrain Escudero. Oliveira stopped both men inside the distance with Submission of the Night-earning performances, Elkins with a polished triangle choke / armbar combination from guard and Escudero with a standing RNC. With those two victories, and the in-cage panache and youthful exuberance Oliveira displayed in securing them, a potential star was born.

Charles started being called “do Bronx” when he moved to Macaco Gold Team. He lived in a Favela (slums) which is sometimes playfully nicknamed “Bronx” and the gym where he first started was also called Bronx, so some of the guys at the gyms started calling him “Charles do Bronx” which translates to “Charles of the Bronx”.

He was raised in poverty at the burg of Guaruja in the state of Sao Paulo. Having a deprived childhood led him to start work very early, helping his mother sell cheese salads from a trailer. It was through this line of work that he met and made friends with a few kids that trained jiu jitsu. When Charles was around 12 years old, he was invited by those same kids to come and train at a local academy and although the Oliveira family could not afford Charles’s tuition, Charles’s uncle, Paulo, knew the instructor and intervened on his behalf so Charles could be free to train without the fees.

Oliveira started training Brazilian Jiu Jitsu with Roger Coelho, the coach that awarded him all his belts until his brown. Charles would later earn his black belt from Jorge Patino after moving to "Macaco's gold team", to professionalise his MMA game. In BJJ,  his first big win was as a white belt in 2003, winning the Sao Paulo State Championship in the Junior Division. He continued winning important competitions year by year, such as 3 stages of the Sao Paulo State Championships in 2004, the Copa Nação Jiu Jitsu in 2005 and an amazing run in 2006 with 16 medals in important tournaments at both his weight class and the open weight division. This succession of good results in sport jiu jitsu stayed alive until 2007 when Charles started pointing his career towards MMA. His first win was at an amateur MMA tournament in Brazil called the “Circuito de Vale Tudo Amador” which he won by armbar.

An immensely talented athlete with a carefree style, Oliveira throws freely on the feet with rangy kicks and punches and shows little regard for getting taken down. That is little surprise as he also sports one of the more dangerous submission games in the lightweight division. As Oliveira seasons he has already been pegged as a possible title contender in the coming years.

But Oliveira - born 1989 - was also young, and despite an undefeated record built mainly in smaller promotions in Brazil, relatively inexperienced. It caught up to him at UFC 124 in late 2010, where "do Bronx" suffered his first career loss via kneebar submission at the hands of Jim Miller. Since then he has gone 2-2 with 1 no contest racking up victories over Eric Wisely and Jonathan Brookins. He would then face off against Frankie Edgar who was looking for his first win at featherweight and Oliveira would lose a decision to the former champ

He would get back in the win column with a third round triangle choke over Andy Ogle that would also earn him a Performance of the Night. Looking to make it two straight when he faced Hatsu Hioki at UFC Fight Night 43, he would go on to win the fight via anaconda choke in the 2nd round. Following the win over Hioki, Olivera would be scheduled to face Jeremy Stephens at the Ultimate Fighter 20 season finale. Attempting submission after submission in a grappling heavy contest, Olivera would go on to win a unanimous decision.

At UFC on FOX 17 Olivera rebounded from a disappointing injury loss to Max Holloway,  by submitting Myles Jury with a guillotine choke in round 1.

He then lost 2 fights in a row both via guillotine choke to former champ Anthony Pettis and contender Ricardo Lamas after this he decided to move up to lightweight where he then defeated Will Brooks by rear naked choke in the first round. After a loss to Paul Felder via tko he went on a tear by going on a 9 fight win streak with 8 finishes including a finish over Kevin Lee, dominating Tony Ferguson and knocking out Michael Chandler to take the vacant championship.

Charles Oliveira has the record for most fights in the UFC before becoming a champion, at 28 fights.