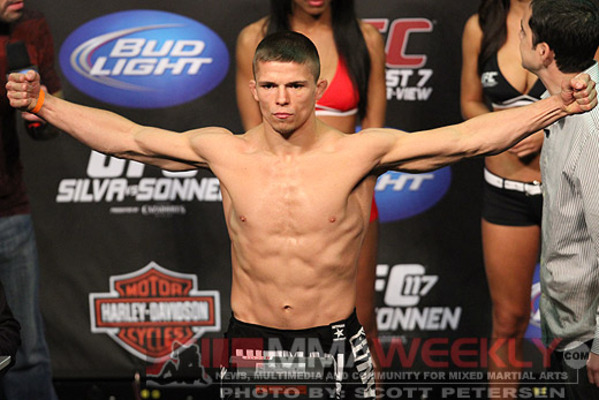 Rick Story is ineligible for regional rankings due to inactivity.
Fighters must have at least one completed MMA bout in the past two years to be ranked.

Washington’s Rick Story proved that he was for real after defeating welterweight standout Jake Ellenberger in a 2008 fight prior to joining the UFC. Although he came out on the losing end of a unanimous decision to undefeated Brit John Hathaway in his UFC debut, Story rebounded with one of the best fights of 2009 when he defeated Brian Foster with an arm triangle choke from within Foster’s half guard to win matching ''Fight of the Night'' and ''Submission of the Night'' bonuses. Among Story's impressive subsequent victories included jiu-jitsu ace Dustin Hazelett, and a three-round battle against Johny Hendricks. The series of wins put Story on the map for significantly higher-profile fights, including a UFC 130 victory over former title challenger Thiago Alves.

More recently, Story went through a rough patch when he dropped two fights in a row. He was set to headline UFC on Versus 4 against Nate Marquardt, but shortly before the fight, it was revealed that Marquardt was not medically cleared to fight. Instead, Charlie Brenneman was tapped to step in as a replacement. Many felt that Story was the clear favorite including the oddsmakers who had him as a 5 to 1 favorite come fight time. Many were shocked when Brenneman used superior wrestling to win a unanimous decision. Story again had a hard fought loss to Martin Kampmann at UFC 139.

Story has since gone 2-2 with wins over Brock Jardine and Quinn Mulhern and losses to Mike Pyle and Demian Maia. He battled TUF 17 winner, Kelvin Gastelum, at UFC 171, but would end up losing a split decision. This sent his overall UFC record to 9-6, but he has not won consecutive fights since his win over Alves at UFC 130 in 2011. He would change that with his next two fights however. He would submit Leonardo Mafra at UFC Fight Night 45 and then would pull off an upset over top prospect Gunnar Nelson handing him his first loss.