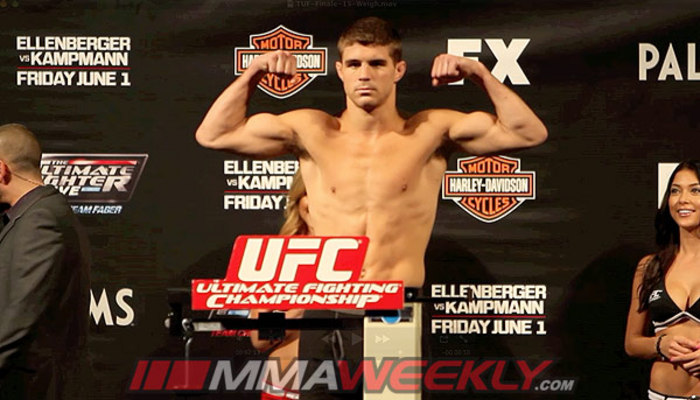 Fighting for a major organization has made Al Iaquinta ineligible for regional rankings.

Al Iaquinta is a lightweight fighter currently signed to the UFC. He is a purple belt in Serra Jui Jitsu and trains out of Serra Longo Fight Team in Long Island, New York. He has held the Ring of Combat lightweight title. He was a finalist of The Ultimate Fighter: Live and won the "Fight of the Season" and "Kockout of the Season" bonuses. Of his six wins, four have been finishes including three T/KOs.

Iaquinta began his pro MMA career fighting for the well known east coast promotion, Ring of Combat. All seven of his professional fights prior to his stint on TUF took place here. Iaquinta went 5-1-1 in this span, finishing in four of his five victories. His lone loss came to the hands of one time UFC fighter Pat Audinwood, who defeated Iaquinta via armbar. From there, Iaquinta would begin to build his name on season 15 of 'The Ultimate Fighter.'

Iaquinta began to make a name for himself as a cast member of 'The Ultimate Fighter: Live,' where he was an exciting prospect in the UFC's lightweight division. After defeating future UFC signee Jon Tuck by decision to get into the TUF house, Iaquinta would become the first pick by coach Urijah Faber. He would pick up the first win for Team Faber in the season when he defeated Myles Jury by split decision. Considered an underdog by many in this fight, Iaquinta showed off all aspects of his game, even threatening Jury with a spladle, something not seen often in MMA. Both fighters would earn a bonus for this fight as it was voted "fight of the season". Iaquinta would later defeat teammate Andy Ogle in the quarterfinal, knocking the Brit out with a brutal elbow which later earned him "Knockout of the Season". He then won a decision over Vinc Pichel, catapulting him into the final against Michael Chiesa.

Iaquinta would lose by first round rear naked choke to Chiesa in the finals but would still be signed to the promotion.He would get his next fight at UFC 164 when he would fight Ryan Couture. Iaquinta looked great en route to a unanimous decision victory, handing Couture his second loss for the UFC. He was linked to a fight with Anthony Njokuani at UFC Fight Night 30 in Manchester England, but an injury forced his opponent off the card. He instead faced Piotr Hallmann and was able to pick up a unanimous decision victory. He would also pick up a decision over Kevin Lee who was making his UFC debut at UFC 169, it would also be Lee's first loss.

Al laquinta then faced Mitch Clarke at UFC 173 on 24 May, 2014. Clarke was able to submit Al laquinta early in Round 2. This submission earned Clarke his first Performance of the Night.

Al laquinta got back into the win column when he faced Rodrigo Damm and defeated him via TKO late in the fight, at 2:26 in Round 3.  He would pick up two more TKO victories both in the second round over Ross Pearson and Joe Lauzon.

The Ultimate Fighter 15 Finale Michael Chiesa def. Iaquinta by Rear Naked Choke at 2:47 of Round 1

Al Iaquinta would go on and win a split decision against Jorge Masvidal at UFC Fight Night 63. He would have an epic post fight reaction to the booing of the fans as he would reply to them "you better do not boo me".

He felt like the UFC didn't care for him after needing surgery on his knee and that in general fighters were not getting paid enough.

Nevertheless Al Iaquinta came back in 2017 and won against Diego Sanchez at UFC Fight Night 108 via K.O in the first round.

He was scheduled to fight against Paul Felder at UFC 223 but the (in)famous "Bus Incident" caused by Conor McGregor and his entourage. Conor threw a dolly at the bus carrying UFC fighters Rose Namanjunas, Khabib Nurmagomedov, Al Iaquinta, Ray Borg and Michael Chiesa. The result was that three UFC 223 fights got canceled.

Michael Chiesa got cut by glass of the shattered window the dolly had hit, Ray Borg got cut and glass in his eyes and Artem Lobov who was with McGregor got pulled from the card. Then Tony Ferguson who was scheduled to fight Khabib injures his knee tearing his acl at the pre fight press conference the night before the fight.

These circumstances led ultimately to the fight between Al Iaquinta and Khabib Nurmagomedov at UFC 223 as he stepped in to fight Khabib for the UFC lightweight title on a days notice. His original opponent Paul Felder got pulled from the card as he was left without opponent.

Al Iaquinta lost the fight against Khabib Nurmagomedov at UFC 223 via unanimous decision. He was later described by his opponent as a "true american gangster".

In 2019 he has fought twice for the UFC and lost both bouts via decision, one against Donald "cowboy" Cerrone at UFC on ESPN + 9 and the other against Dan "hangman" Hooker at UFC 243.