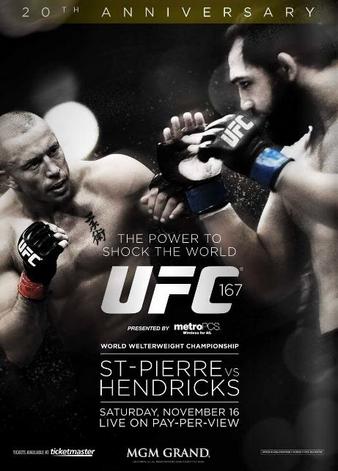 Tapology members can make predictions for upcoming MMA & Boxing fights. UFC 167 is closed for new predictions. 1,707 total members made predictions on this event, breaking down as follows below.

Leaderboard of the best predictions by member: UFC 167 Leaderboard

UFC 167 celebrated the UFC's 20th anniversary with another title defense by Georges St-Pierre, who also defended his belt at the historic UFC 100 event. GSP only needs 40 seconds to break Penn's record "for the most fight time in UFC history. The greatest welterweight fighter of all time looked to extend his title defense streak. On the other side of the octagon, Hendricks had the highest takedown average in welterweight history ( 5.47 per 15 minutes) coming with a streak of 6 wins, 3 of them by KO/TKO.

The Co-Main event features former UFC champion Rashad Evans coming with a split decision against Dan Henderson.  Evans had the highest takedown average in LHW history, and looked to defeat his friend Chael Sonnen, famous for trash-talking his opponents leading up to title fights at UFC 117 & 148. Sonnen looked for another win before he went to Brazil to coach a third season of The Ultimate Fighter: Brazil.

Watch the behind-the-scenes mayhem from UFC 167.

Watch the tense highlights from the UFC 167 weigh-ins.

Watch the stars of UFC 167 discuss their upcoming battles at the pre-fight press conference.

Watch the extended video preview for the UFC 167 fights between GSP and Johny Hendricks, plus Rashad Evans vs. Chael Sonnen.

Watch the artistic trailer for UFC 167: St. Pierre vs. Hendricks