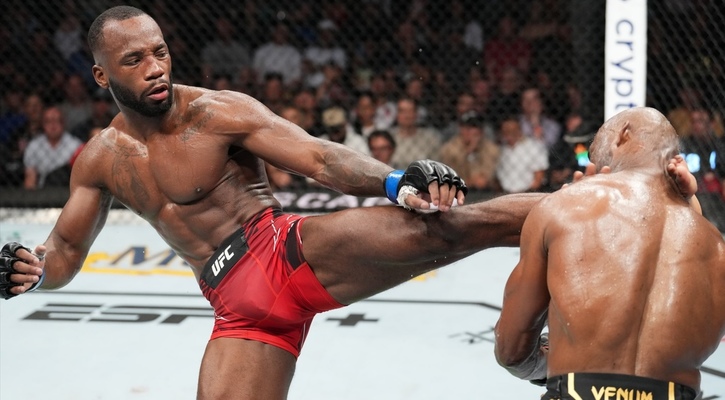 Fighting for a major organization has made Leon Edwards ineligible for regional rankings.

Edwards was born in Kingston, Jamaica and lived with his brother Fabian (who is a fighter in Bellator MMA)and his parents in a one-room wooden shack with a zinc roof. Edwards and his family moved to Aston, Birmingham, England when Edwards was nine years old. He grew up in a high crime neighborhood. Edwards' father was shot and killed in a nightclub when he was thirteen. Edwards' nickname, Rocky, was given to him by his friends in school due to his propensity to engage in street fights.  Edwards began training MMA at the insistence of his mother, who was trying to get him away from drug dealing and gang activity in his neighborhood. Edwards began training at the Ultimate Training Center in Erdington two to three times a day. He took up training younger fighters at the gym so that his mother would not have to pay his membership dues.

Edwards made his amateur MMA debut eight moths into his training and won four fights in one day at a local day. Edwards made his professional debut on June 5, 2011 and went 8-1 in his pre-UFC career. This included a 5-0 run in BAMMA where he won and defended the BAMMA Welterweight Championship. His sole loss was a disqualification due to throwing an illegal knee.

Edwards made his UFC debut against Cláudio Silva on November 8, 2014 at UFC Fight Night: Shogun vs. Saint Preux. Edwards lost via split decision, but quickly bounced back by knocking out Seth Baczynski with a straight left and ground and pound eight seconds into the first round (UFC Fight Night: Gonzaga vs. Cro Cop 2). This is the second fastest knockout in UFC Welterweight history and earned Edwards Performance of the Night honors. Edwards defeated Paweł Pawlak via unanimous decision (UFC Fight Night: Bisping vs. Leites) before facing future rival and future UFC Welterweight Champion Kamaru Usman on the early prelims of UFC on Fox: dos Anjos vs. Cowboy 2. Usman, whos is a 2010 NCAA Division II national champion, a three–time NCAA Division II All-American, and a NAIA national qualifier, took advantage of Edwards' lack of wrestling experience by taking Edwards to the ground and controlling him for most of the fight. The unanimous decision loss to Usman is Edwards' most recent defeat.

Edwards returned to action against Belal Muhammad on March 13, 2021 (UFC Fight Night: Edwards vs. Muhammad). Edwards dominated the first round before accidentally poking Muhammad in the eye 18 seconds into the second round. The fight ended in a no contest as Muhammad was unable to continue. On June 12, Edwards faced Nate Diaz in the first ever non-title, non-main event five round UFC fight (UFC 263). Edwards outclassed Diaz on the feet and on the mat for four rounds before being stunned by a Stockton slap, straight left combo from Diaz late in the fifth round. Edwards was wobbling on his feet momentarily while Diaz pointed at him and taunted him. Diaz's lack of urgency and Edwards' recovery allowed him to survive this scare and pick up a 49-46 unanimous decision win from all three judges.

After beating Diaz, Edwards used his unbeaten streak to campaign for a title shot against Usman, who had won 15 UFC fights in a row and had five successful title defenses. Edwards and Usman faced each other in the main event of UFC 278 in Salt Lake City, Utah. Edwards came out strong in the first round, taking Usman down and getting to his back, where he nearly got a rear naked choke. The next three rounds saw Usman outclassed Edwards, out-striking him and taking him down five times. In between the fourth and fifth rounds, Edwards' coach Dave Lovell delivered an impassioned plea for Edwards not to give up, imploring him to "stop feeling fucking sorry for yourself . . . ." Late in fifth round, Edwards faked a one-two combo and caught Usman with a head kick, landing flush on Usman's temple and knocking him out cold. This was the first time Usman had lost in the UFC and the first time in his career that he had been knocked out. Edwards and his team had been practicing the head kick throughout his training camp. Edwards became the second British UFC Champion and has become an inspiration to underprivileged youth in both Jamaica and the United Kingdom.