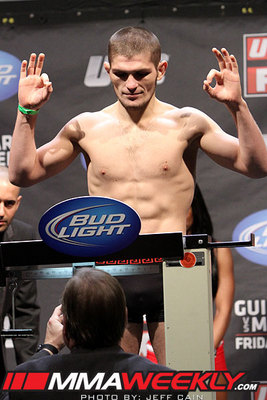 Khabib Nurmagomedov is ineligible for regional rankings due to inactivity.
Fighters must have at least one completed MMA bout in the past two years to be ranked.

Khabib Nurmagomedov holds a Black Belt in Judo and has also competed in Sambo. He is a 2 time Russian Combat Sambo Champion and a 2 time World Sambo Champion. He began his MMA career in 2008 and hasn't looked back, racking up wins for Pankration, M-1 and ProFC bringing his pro record to 16-0.

The UFC would take notice and sign the rising star and he would not disappoint finishing 2 out of 4 opponents in the Octagon. He would pick up the wins over some tough veterans in Thiago Tavares, Gleison Tibau and a win over Kamal Shalarous in his debut. He followed it with a dominating victory over striker Abel Trujillo at UFC 160, by putting on a grappling clinic and scoring a record number of take downs in a UFC fight (21 out of 27 attempted).

Khabib's next UFC fights were at UFC 165: Jones vs. Gustafsson on September 21st, 2013 against Pat Healy and on April 19th, 2014 against Rafael dos Anjos at  UFC on FOX 11: Werdum vs. Browne. Khabib earned unanimous decision victories in both fights running his undefeated MMA record to 22-0.

Khabib tore his meniscus training for a fight against Cowboy Donald Cerrone and tore it once more when the fight was rescheduled. He was scheduled to face Tony Ferguson at the TUF 22 Finale, but broke a rib in training.

After two years of being plagued with injuries, Khabib finally returned to the octagon on April 16th 2016 to face Pennsylvania prospect Darrell Horcher, who replaced the injured Tony Ferguson. After a brief feeling-out process in round 1, Khabib quickly finished Horcher via ground-and-pound TKO in round 2.

The UFC sought to bring Khabib and Tony Ferguson once more into the octagon for UFC on FOX 19, however the fight was canceled yet again. This time, however, it was Ferguson who pulled out due to injury. Michael Johnson replaced the injured Ferguson and the bout was rescheduled for UFC 205. The first round saw Khabib encountering a fleeting moment of adversity, when Johnson hit Khabib with a quick right hook, causing the Dagestani to wobble briefly. However, that was only highlight of Johnson's night, as Khabib delivered a one-sided beating which ended in a submission victory via Kimura.

Coming off a dominant victory over Michael Johnson, Khabib was scheduled to face Tony Ferguson for the third time at UFC 209. All signs were pointing to both fighters making it to the cage in the lead up. However during weigh-ins, Khabib was nowhere to be found. It was later reported that he entered a hospital due to complications stemming from a bad weight cut. The fight was canceled.

Finally...for the fourth time...Khabib was scheduled to Tony Ferguson at UFC 223 for the UFC lightweight championship. On April 1st 2018, it was reported that Ferguson tore his MCL while fulfilling his media obligations for the UFC. The fight was canceled, and Dana White commented that he would never reschedule it again. With a week left until fight night, the UFC scrambled to find a replacement and UFC Featherweight Champion Max Holloway offered to take the fight. However, a day before the fight the NYSAC ruled that Holloway was unfit to compete due to concerns of his rapid weight cut. Paul Felder, who was scheduled to face Al Iaquinta, offered to serve as a short notice replacement, but the NYSAC rejected him due to Felder being unranked. Anthony Pettis, who was originally scheduled to face Michael Chiesa who pulled out due to lacerations on his face he received from the bus incident with Conor McGregor, was sought as a replacement, however a disagreement emerged over pay. Ultimately, Ragin' Al Iaquinta offered his services to take the fight on a day's notice and save the card.

On April 7th 2018, Khabib faced Al Iaquinta for the UFC lightweight championship. In the first round, Iaquinta was able to pressure Khabib and seize octagon control. For a grappler who depends on the cage for his takedowns, Khabib was forced to shoot for takedowns in the middle of the cage, something that's not often seen. With a little perseverance, Khabib was able to take Iaquinta down and begin his ground and pound for the first two rounds. A question on many people's minds was whether Khabib could keep up for five whole rounds and pace himself. This question was answered when Khabib surprisingly decided to stand with Iaquinta in rounds 3 and 4. Khabib later stated that his corner wasn't happy with him deviating from the gameplan and playing into Iaquinta's strength, which is his boxing. Finally in round 5, we see Khabib return to his gameplan and take Iaquinta down. Khabib defeated Al Iaquinta by unanimous decision (50-44x2, 50-43) to become the UFC lightweight champion.

On the 6th of October 2018 at UFC 229 Khabib defeated Conor McGregor to retain his lightweight title. He dropped McGregor in the fight, and submitted him with a neck crank in the fourth round. Afterwards, Nurmagomedov jumped out of the Octagon and attacked McGregor's teammate Dillon Danis. The fight was one of the most highly anticipated events in the history of the UFC. According to UFC President Dana White, the fight sold over 2 million pay-per-view buys.

About a year later at UFC 242 Nurmagomedov defended his belt for the second time against the then interim champion Dustin Poirier. Despite dustin having sucsess early on catching khabib with a big right hand and even getting him into a tight guillotine choke he failed to capitalize on the attempt and Nurmagomedov got out. Then in the 3rd round Nurmagomedov caught Poirier in a rear naked choke tapping Poirier out and retaining the lightweight crown and moving to 28-0

October 2020 UFC 254, this would be Nurmagomedovs last fight, he shared the octagon with rising contender the Interim Lightweight champion Justin Gaethje who had knocked all of his opponents in the UFC despite a small setback against Dustin Poirier and former Lightweight champion Eddie Alvarez he came back winning 3 fights in a row before fighting tony ferguson a bout that was supposed to happen between Nurmagomedov and Ferguson. Gaethje knocked out tony ferguson in the last round after beating him up for 5 rounds making him the new UFC interim Lightweight champion.

Although Gaethje started strong landing leg kicks and 2 big shots he also faced problems as Nurmagomedov was putting on extrmley high pressure almost a sense of urgency on him (it was later shown that Khabib fought with a broken toe) in the 2od round Khabib was able to get the fight to the mat and getting Gaethje in a Triangle choke and chocking him unconsious.

Nurmagomedov announced his retirement after this fight due to the passing of his father and vacated the belt in January 2021.