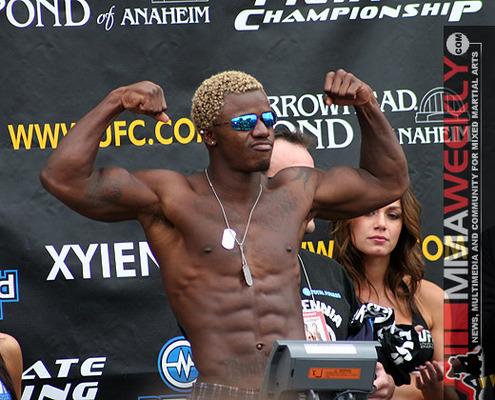 Melvin Guillard is ineligible for regional rankings due to inactivity.
Fighters must have at least one completed MMA bout in the past two years to be ranked.

The cocky "Young Assassin,” Melvin Guillard, made his professional MMA debut in 2002, and promptly went on a ten-fight unbeaten streak, finishing eight of the ten opponents inside the distance. By the time he earned a contract with the Ultimate Fighting Championship, Guillard had built a solid 16-4-2 (1 NC) record fighting in smaller organizations. Twenty of his twenty one fights since that time have been fought in the UFC making home one of the most prolific fighters in the companies history. Of his thirty one wins, he has finnished twenty two including a staggering twenty T/KOs. He has earned five "of the night" bonuses including two for "Fight of the Night" and and three for "Knockout of the Night". He holds notable wins over "The Irish Hand Grenade" Marcus Davis, "The Saint" Rob Emerson, Dennis Siver, Gleison Tibau, Jeremy "Lil' Heathen" Stephens, Evan Dunham, Shane Roller and Mac Danzig.

Melvin gained fame when he appeared on the second season of The Ultimate Fighter although he was quickly eliminated by Josh Burkman in the first round of the tournament. He then defeated Marcus Davis in his debut for the Zuffa owned promotion in 2005.

After losing back-to-back bouts to Joe "Daddy" Stevenson and Rich "No Love" Clementi and garnering some ill-repute outside the Octagon, Guillard was cut from the promotion in late 2007. He was invited back in 2008, however, and earned consecutive victories over Dennis Siver and Gleison Tibau to reemerge as a contender. Guillard also appeared more patient and mature in the cage in his second stint under Zuffa.  A loss to Nate Diaz was followed by a nearly two year, five fight unbeaten streak had Melvin finally where he wanted to be as everyone thought he was finally realizing his true potential and garnering title shot talk.

This talk would soon come to an end as Melvin then went on to lose three of his next four bouts, including the first KO loss of his career.  While Guillard has been criticized for inconsistency throughout his career and has experienced his share of problems outside the cage, he is one of the most experienced fighters in the lightweight division.  Guillard possesses extraordinary reflexes, knockout power and given his relative youth, still has plenty of upside to capitalize on. He recently left Greg Jackson's camp to train with the Blackzillions in Boca Raton, Florida. He has continued to see mixed results since the move.

He has also garnered much criticism for his antics. He has engaged in nasty wars of words with almost all of his opponents, even though he is not always able to back up his talk. He has bee accused of greasing multiple times although he has never been caught doing so. Before his loss to Joe "Daddy" Stevenson, he accused Stevenson of using Human Growth Hormone. When the post fight drug tests came back however, Stevenson passed his while Guillard failed his due to cocaine. It often seems that his hardest opponent has been himself.

He took on Jamie "C-4" Varner at UFC 155: Dos Santos vs. Velasquez 2 in a fight that may have determined his future with the company. In an exciting and back and forth fight, Guillard came up short, losing a split decision. He would get back in the win column when he put Mac Danzig to sleep at UFC on FOX 8: Johnson vs. Moraga also earning himself Knockout of the Night honors. He next took on the hard hitting Brit, Ross "The Real Deal" Pearson, at UFC Fight Night 30: Machida vs. Munoz  in the co main event. Unfortunately, the fight was stopped and declared a no contest early in the first round due to an illegal knee thrown by Melvin. This marked the sixth time that he had been in either the co main event or the main event of a UFC Card. The two were scheduled to have a rematch at UFC Fight Night in March, 2014, but a knee injury forced Pearson off of the card. Melvin would instead face Michael "The Menace" Johnson on the same card. He would lose the fight by unanimous decision and would be cut from the UFC following the loss.

Guillard announced on April 8th of 2014, via Twitter, that he signed with WSOF.