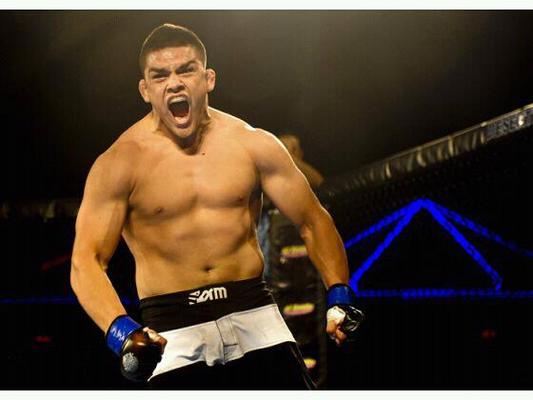 Fighting for a major organization has made Kelvin Gastelum ineligible for regional rankings.

Kelvin Gastelum was a member of the seventeenth season of The Ultimate Fighter.  Kelvin won his spot in the house by taking a unanimous decision over Kito Andrews. Chael Sonnen selected Gastelum in the seventh and final round making him the thirteenth fighter selected overall. At just 21 years old, Kelvin is the youngest fighter ever to make the cut and be on The Ultimate Fighter show.

In the fourth episode, Jon "Bones" Jones picked Kelvin to fight Bubba McDaniel, Team Jones' third round pick and sixth overall fighter.  Kelvin won his fight with McDaniel via second round rear-naked choke.  In his next fight in the house Kelvin would TKO Collin "The Dick" Hart in the first round followed by a rear-naked choke over Josh Samman in the semifinals securing his spot in the final.  Gastelum was the dark horse of the competition and was considered the underdog in most of his match ups.  Gastelum also took home the $25,000 for the Submission of the Season.

On the TUF 17 Finale he would face off against Uriah "Prime Time" Hall who had been knocking out everyone he fought in the house.  Once again Gastelum was considered the underdog and he would once again prevail beating Hall by a split decision to win the six figure contract and a new Harley Davidson.  Kelvin was also the youngest person to win The Ultimate Fighter at 21 years old.

Gastelum was next supposed to face a tough test against 10 fight UFC veteran Paulo Thiago at UFC Fight Night 27 in Indianapolis, but about a month before the bout Thiago pulled out of the fight because of a knee injury and was replaced by Brian Melancon, who was coming off an impressive knock-out win over Seth "Polish Pistola" Baczynski less than 2 months earlier.  The Ultimate Fighter winner would once again impress by finishing off Melancon in the very first round with a rear naked choke.  He faced the biggest test of his career when he took on Rick "The Horror" Story at UFC 171, but he was able to out point the long time veteran on his way to a split decision victory which moved overall record to a perfect 8-0.

Gastelum's win streak would continue against  Nico Musoke at UFC Fight Night 45 where he would pick up a unanimous decision.  Then a hot prospect, Gastelum was featured in the co-main event of the UFC 180 against Jake Ellenberger.  Gastelum was able to catch the more experienced fighter in a rear-naked choke near the end of the first round to secure the win and continue his undefeated streak. He would however lose for the first time in his next fight when he went up against Tyron Woodley losing a very close split decision.