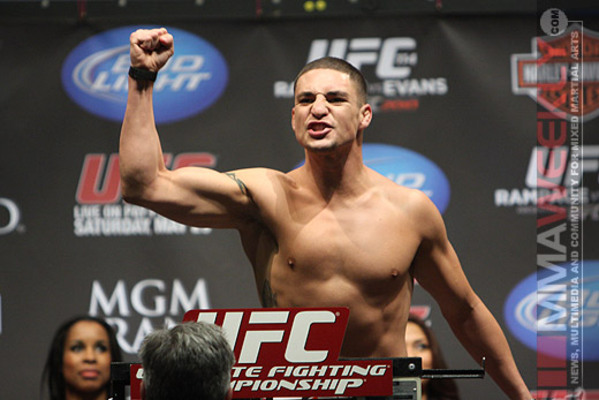 Fighting for a major organization has made Diego Sanchez ineligible for regional rankings.

New Mexico native Diego Sanchez is one of the more unique fighters competing in the UFC. His personality, at times laid back and at times volatile and aggressive, causes most fans to either love him or hate him. He has remained one of the most aggressive and complete fighters in the UFC’s lightweight and welterweight divisions for the past several years.

Sanchez first rose to prominence on the local MMA scene in New Mexico, winning the King of the Cage Welterweight Championship after compiling a professional record of 11-0 from 2002-2004, with notable victories over Mike Guymon (by armbar) and Jorge Santiago along the way. Sanchez’s big break came in 2005, when he competed in and won the debut season of Spike TV’s popular reality show “The Ultimate Fighter,” swarming on and overwhelming the smaller Kenny Florian in the live finale to win by TKO in the first round. Sanchez distinguished himself on the star-packed first season of the hit series as much for his eccentric demeanor as for his in-cage tenacity.

After defeating Florian at 185, Sanchez dropped to 170 lbs. and compiled five straight victories, including wins over Nick Diaz, John Alessio, Karo Parisyan, and Joe Riggs, before losing the first fight of his professional career to bitter rival Josh Koscheck in 2007. Since then, Sanchez has alternated between the welterweight and lightweight divisions, defeating the likes of Joe Stevenson and Clay Guida and battling Lightweight Champion BJ Penn in a losing effort in 2009.

Sanchez is a black belt in Gaidojutsu, the fighting style created and taught by MMA trainer Greg Jackson, and he is also highly ranked in Brazilian Jiu-Jitsu. At the beginning of his career he took most of his opponents to the ground and attempted to finish by TKO or submission, but Sanchez has changed up his game to incorporate more kickboxing and clinch work in recent years. He won a World MMA Award in 2009 for Fight of the Year (vs. Clay Guida), as well as recognition in the Wrestling Observer Newsletter for Fight of the Year in 2006 (vs. Karo Parisyan), and again in 2009 for the Guida fight. Whether or not Sanchez achieves a UFC title, he can consistently be counted on for arriving in the Octagon in top shape, fired up and ready for a war.

After the loss to Penn, Sanchez returned to the welterweight division where he faced up and comer John Hathaway at UFC 114 in a losing effort. Sanchez was able to get his career back on track with a decision victory against Paulo Thiago at UFC 121. The bout went on to win Fight of The Night.

Sanchez next headlined UFC Live: Sanchez vs Kampmann, opposite of Danish fighter, Martin Kampmann. The bout was a hotly contested back and forth bout which ended with Sanchez winning a close and controversial unanimous decision. The bout won Fight of the Night with both fighters receiving an unprecedented $160,000 bonus each.


In his next fight, Sanchez fought Jake Ellenberger in the first UFC event aired on Fuel TV. Ellenberger cruised during the first 2 rounds, but Sanchez mounted a valient comeback in the 3rd and several times put Ellenberger in dangerous positions. The fight would be awarded to Ellenberger and would also win Fight of The Night, making Sanchez the Fight Of The Night winner in his last 3 straight fights.

Sanchez would then face Takanori Gomi at UFC on Fuel TV 8 in Japan. He would earn himself a Split Decision victory over Gomi in a very close fight.  He had one of the toughest tests of his career when he battled Gilbert Melendez at UFC 166. In an epic brawl that will go down as one of the best fights in MMA history, Sanchez came up short, losing a unanimous decision victory. He would fight surging, undefeated prospect, Myles Jury, at UFC 171 in his next fight. He would come up short losing again by Unanimous Decision.
In his next bout he shared the octagon with the highly touted Englishman Ross Pearson, the fight went the distance with Diego Sanchez winning the highly controversial split decision. He was then set to take on Joe Lauzon at UFC 180 but weeks before the event Lauzon was forced to withdraw due to an injury.
The Ultimate Fighter 1
Episode 4 Sanchez def. Alex Karalexis by Submission (Rear Naked Choke) at 1:47 in Round 1
Episode 8 Sanchez def. Josh Rafferty by Submission (Rear Naked Choke) at 1:48 in Round 1
Episode 11 Sanchez def. Josh Koscheck by Split Decision
TUF 1 Finale Sanchez def. Kenny Florian by TKO at 2:49 of Round 1

Watch this short documentary about Diego Sanchez's road to MMA.