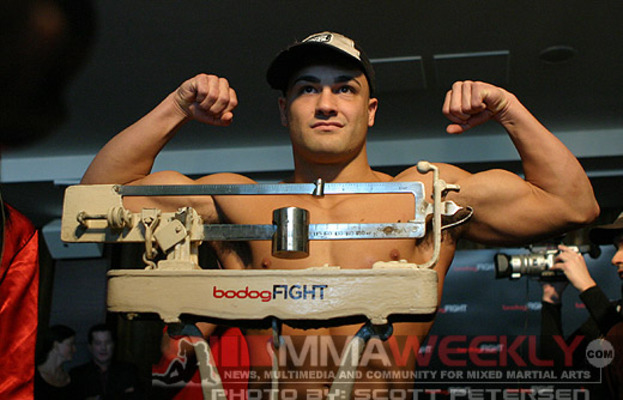 Fighting for a major organization has made Eddie Alvarez ineligible for regional rankings.

Promotional video of Eddie Alvarez talking about the opening of his new MMA store "The Red Corner" in Philadelphia, Pennsylvania. In the video Alvarez talks about the concept for the store, how they came up with the design for the photos and layout, and why he thinks it's the right time to open a business such as this in Philadelphia.

Watch this revealing interview with Eddie Alvarez, as he discusses coming to terms after a lengthy contract dispute with Bellator MMA.

Born in a rough section of the city of Brotherly Love, Philadelphia, Pennsylvania -  Eddie Alvarez knows a thing or two about perseverance. Alvarez wrestled for his high school as a teen, and was a two-time National Prep All-American, and placed sixth twice in the National Prep School Wrestling Championships. After graduating, Eddie would immediately pursue a professional fighting career, and had his first fight after only eight months of MMA training.

Though he has yet to set foot in a UFC Octagon, Eddie Alvarez has established himself as one of the most respected and highly ranked fighters in MMA's lightweight division. After turning professional in 2003, Alvarez ran his professional record to 10-0 before losing the first fight of his career to respected welterweight fighter Nick Thompson in 2006. Following the loss, Alvarez dropped down to his more natural weight class of 155 lbs., defeating notable fighters Andre Amade, Joachim Hansen, and Tatsuya Kawajiri during his name-making run in the 2008 DREAM Lightweight Grand Prix. Two of those tilts in particular, the fight against Hansen and the fight against Kawajiri, were start-to-finish barnburners that gained Alvarez a major following among MMA’s hardcore fanbase. Following the second loss of his career, to highly ranked Japanese submission specialist Shinya Aoki, Alvarez competed in and won the first ever Bellator Lightweight Championship.

The beginning of his career was saturated with knockout and TKO victories due to his naturally heavy hands and proficiency in American boxing, but Alvarez has increasingly established himself as a powerful wrestler with dangerous submission skills, defeating all three of his opponents by choke en route to winning the Bellator Lightweight Championship in 2009. Alvarez shows up to his fights in shape, and maintains a high pace.

On November 19th, 2011, Alvarez faced off against season 5 lightweight tournament champion Michael Chandler. In one of the most exciting fights in Bellator history, Alvarez was defeated in the 4th round via rear naked choke. Alvarez was then given a chance to avenge an earlier loss in his career. At Bellator 66, he soundly defeated Shinya Aoki via TKO in the 1st round of their bout. He would then face Patricky Freire at Bellator 76. Alvarez would finish this fight with a head kick KO in the first round upping his stock for a potential move to the UFC. Many anticipate this was his last fight for Bellator as speculation looms that he will sign with the UFC after his current contract expires. After a long process and lawsuits Alvarez finally came to an agreement with Bellator and will now rematch against Michael Chandler on Bellator's first pay per view card that was supposed to be headlined by Rampage Jackson vs. Tito Ortiz but due to an Ortiz injury Chandler vs. Alvarez was moved to the main event. Alvarez would get his revenge and his belt back beating Chandler by Split Decision in a very closely contested match. He is set to rematch Chandler again and finish the trilogy at Bellator 120.

Alvarez was signed to the UFC on August 19, 2014 and on September 27, 2014 he made his UFC debut against Donald Cerrone  at UFC 178: Johnson vs. Cariaso losing via unanimous decision. Alvarez was scheduled to fight

Benson Henderson next but had to pull out and was replaced by Donald Cerrone. His next fight came at UFC 188: Velasquez vs. Werdum

where he fought Gilbert Melendez and won via split decision.