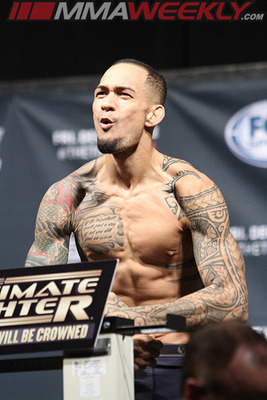 Fighting for a major organization has made Yancy Medeiros ineligible for regional rankings.

Medeiros is a Hawaiian fighter who started his career as a Light Heavyweight, but he has been moving down the divisions and is currently fighting as a Lightweight. He started practicing Karate at a young age and competed in Wrestling during high school.  He debuted professionally at age 18 against Rigo Mendoza, whom he defeated by KO.  After that, Medeiros won 6 more fights, putting him on a 7-fight winning streak before signing with Strikeforce, where he improved his streak further to 9 victories without knowing defeat.

Yancy Medeiros would fight for the first time in the UFC against Russian fighter Rustam Khabilov, who had an impressive debut Knocking out Vinc Pichel. Medeiros was offered this fight after a 3-year absence from competing in MMA, but he has not been inactive at all; he has dedicated himself to training, improving his diet, and modifying his lifestyle.  He claims to be healthier and stronger after dropping 50 pounds.  He has 6 KO/TKOs in 9 wins, which he accomplished in the LHW and MW divisions.  If he managed to keep his power, he could be a force to reckon with in the 155-pound division.

He would however lose by TKO to Rustam in the first round when he broke his thumb trying to stop a takedown. He would then fight Yves Edwards and would finish him by TKO in the first round; however, it would be converted to a no contest when Medeiros tested positive for marijuana.  He would receive a 90-day suspension for the offense.  He would return to the cage but would lose by submission to Jim Miller.  He would get another shot though, and would finish Damon Jackson with an impressive reverse bulldog choke to earn himself a Performance of the Night bonus as well.

Following the contest with Jackson, Medeiros would be scheduled to face Joe Proctor at the Ultimate Fighter 20 season finale. Medeiros would go on to win via guillotine choke with seconds left in the first round.