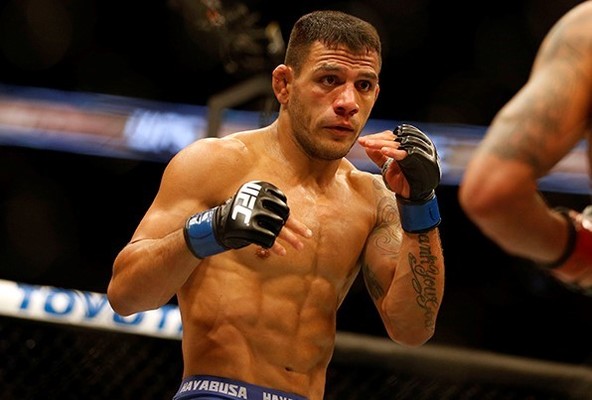 Fighting for a major organization has made Rafael dos Anjos ineligible for regional rankings.

After racking up an impressive record of 11-2—mainly in his native country of Brazil—to start his MMA career, Rafael dos Anjos, a Brazilian Jiu-Jitsu black belt under Aldo “Caveirinha” Januario de Oliveira, entered the UFC in 2008. Dos Anjos became infamous following his third-round loss to power-puncher Jeremy Stephens, as he was knocked out with a vicious uppercut after winning the majority of the fight. Dos Anjos would go on to lose his next fight in a competitive unanimous decision to lightweight stalwart Tyson Griffin.

Dos Anjos has since gone 7-2 including wins over George Sotiropoulos, Anthony Njokuani, and Mark Bocek. Dos Anjos has established himself as a lightweight with the grit, determination, and skill necessary to make it to the top of the division. Riding a three fight win streak Dos Anjos would keep the streak going when he won a very close decision against Evan Dunham at UFC on FX 8. And he would add to it making it five straight when he won a decision over Donald Cerrone, a win that certainly moves him up the rankings. He would however lose his next bout to Russian sensation Khabib Nurmagomedov. He would bounce back impressively with a 2nd round TKO over Jason High and then and even more impressive first round TKO over former champion Benson Henderson. He would pick up his third straight win with a dominant decision over Nate Diaz.

Following the win over Diaz it was announced that Dos Anjos would finally receive a shot at the title against Anthony Pettis. He was able to pull off the upset and win in a dominant five round decision over Pettis becoming the first Brazilian lightweight champion.