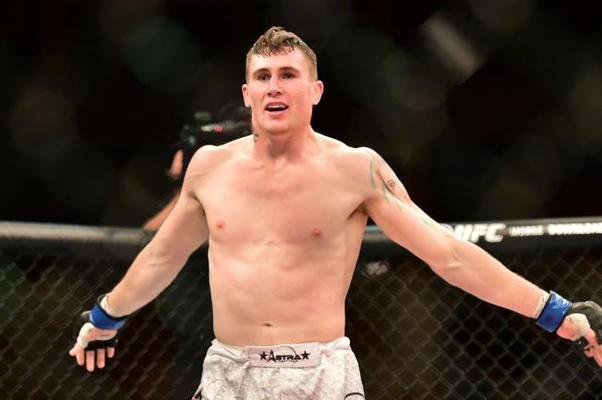 Fighting for a major organization has made Darren Till ineligible for regional rankings.

Darren Till News View All

Darren Till was born and raised in Liverpool, England. Till started training Muay Thai aged 12 a sport he would eventually be crowned the European K1 Champion in and dropped out of school aged 14 to pursue his fighting career. At age 15 Till would turn professional and 2 years later he would start training MMA with Team Kaobon at the age of 17. Not everything went smoothly during The Gorilla's youth, according to Till he would frequently get into trouble with others while living in Liverpool, in an interview with EssentiallySports Till would reveal that he got kicked out of his house after throwing a shoe at his mother, leading to Till living in different places such as his gym and the houses of relatives.

In August 2012, Darren Till almost died after being stabbed a millimetre from his main artery. This incident would lead to an intervention by his coach Colin Heron who advised Till to move to Brazil. In Brazil Till would join Astra Fight Team, and besides planning to go to Brazil for 6 months, Till would live in Brazil for 3 and a half years. At this point in time Till also had a daughter and girlfriend in Brazil. In 2016 Till finally returned to England to rejoin Team Kaobon under coach Colin Heron.

Darren Till started his professional MMA career in February 2013 against Luciano Olivera Ribero with a decision win. During 2013 Till would fight 7(!) more times building an impressive 8-0 with 6 KO/TKO finishes, 1 submission and the before mentioned decision win. In 2014 Till would continue his impressive campaign in the Brazilian MMA world by beating Deivid Caubiack with a first round KO, Sergio Matias with a second round submission and Guillermo Martinez Ayme by unanimous decision.

2015 would prove to be an important year for Darren Till as after beating Laerte Costa e Silva by TKO, Till would get his shot at a UFC debut. Till would take this opportunity and beat Wendell de Oliveira by second round KO at UFC Fight Night: Condit vs. Alves, starting his impressive UFC campaign in which he would go undefeated for 6 fights straight between 2015-2018 building on his 17-0-1 (5-0-1 in UFC) record.

After beating big names such as Donald Cerrone and Stephen Thompson, Till would get his shot at the UFC Welterweight Championship against then reigning champion Tyron Woodley. This bout would result in the first UFC loss for Till after being submitted in the second round by brabo choke on the 8th of September 2018. The following year Till would face off with Jorge Masvidal in London, England on the 16th of March 2019. Till would lose to Masvidal by second round KO, later that year Till would bounce back with a split decision win against Kevin Gastelum on UFC 244.

Till fought once in 2020, this time against Robert Whittaker. Darren Till would lose this bout by unanimous decision after 5 rounds. In 2021 Till was scheduled to fight Marvin Vettori but had to pull out due to a broken collarbone, Vettori would beat short notice replacement Kevin Holland and get a title shot against Israel Adesanya. At the time of writing this wiki update Till does have a fight scheduled against Derek Brunson targeted for UFC 266 in London England and a 18-3-1 (6-3-1 in UFC) record.