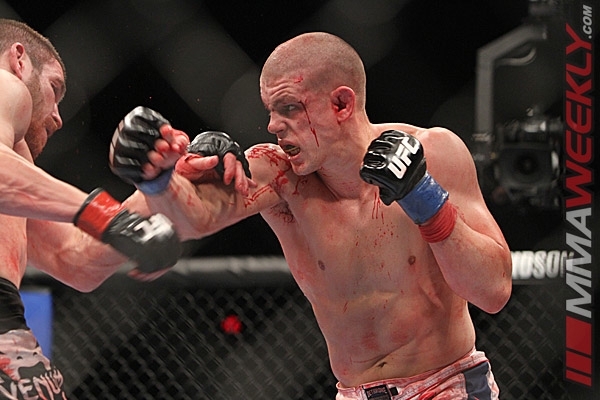 Joe Lauzon is ineligible for regional rankings due to inactivity.
Fighters must have at least one completed MMA bout in the past two years to be ranked.

UFC fighter Joe Lauzon lives and trains near Boston, Massachusetts, where he maintains an MMA academy bearing his name. A Network Administrator by trade, he began MMA as a hobby but quickly left his job to train full time. Fighting in the UFC’s lightweight (155 lb.) division, Lauzon exceeded initial fan expectations upon entering the promotion. He made his name in the organization in a big way, knocking out MMA legend Jens “Little Evil” Pulver in the first round in his UFC debut, in what was expected by most to be a successful return to the big leagues for Pulver. He is known to be a very exciting fighter which is demonstrated by his all his post fight award bonuses which is currently the most in the UFC at 13.

With his younger brother Dan Lauzon also a professional fighter with UFC experience, Joe Lauzon is considered the more tactical and technical of the two fighters. He possesses excellent agility and quick-twitch musculature, powerful strikes as a result of his long reach, and very solid ground skills. A smart and cagey fighter, Lauzon will often reach into his bag of tricks to utilize techniques most fighters  may have learned, but forgot to apply.


After his upset win over Pulver, he was given a spot on the fifth installment of The Ultimate fighter. He was placed on BJ Penn's team. There was some initial tension as the coach for the other team was none other than Jens Pulver. This is the only time that a contestant has previously beaten a coach from their TUF season. He won his first two fights against Brian Geraghty and Cole Miller before being eliminated by the season runner up, Manvel Gamburyan. He made his official UFC debut at the TUF 5 finale, defeating fellow contestant Brandon Melendez by triangle choke in the second round. Lauzon has remained in the UFC continually since the show. He is one of only 4 fighters from that season to still be in the UFC.

Lauzon has lost only to top names in the UFC lightweight division. These include an exciting back-and-forth affair with Kenny “Ken-Flo” Florian at UFC Fight Night 13 for greater Boston area bragging rights, and a war with tough Canadian standout Sam Stout in which Lauzon nearly ended the fight via submission, but was worn down and out-boxed in the later rounds. He was defeated by former WEC lightweight champion, Anthony Pettis, in devastating fashion by a head kick for his most recent loss.

Lauzon has defeated tough fighters, including Jeremy Stephens via armbar, as well as Kyle Bradley. Recent victories over Melvin Guillard and a comeback wave riding Jamie Varner have helped to solidify his place towards the top of the division. He next took on fellow grappler, Jim Miller in the Co-main event at UFC 155. In and incredible fight that showed huge heart from Lauzon, Miller came out with a unanimous decision win. Although he was badly hurt and bleeding profusely after the first round, Lauzon was able to battle on and the two received $65,000 "Fight of the Night" bonus for his effort. He would lose another decision to Michael Johnson  in his next bout.

Lauzon would get back to his winning ways with back to back victories. First he would win a decision over Mac Danzig followed up by yet another Fight of the Night bonus with his TKO victory over Mike Chiesa. The fight was stopped due to a nasty cut over Chiesa's eye, it was a good finish for Joe but would have been great to see the fight continue as the two were leaving it all in the cage. With this bonus win Lauzon surpassed Anderson Silva with the most post fight bonuses in the UFC history.

Following the bout with Chiesa, Lauzon was briefly linked to a bout with Diego Sanchez at UFC 180 in Mexico. Due to injuries to both fighters, the bout was scrapped. Lauzon would then fight Al Iaquinta at UFC 183 but would get finished by TKO in the second round.

Episode 5 Lauzon def. Brian Geraghty by Rear Naked Choke at 1:13 of Round 1