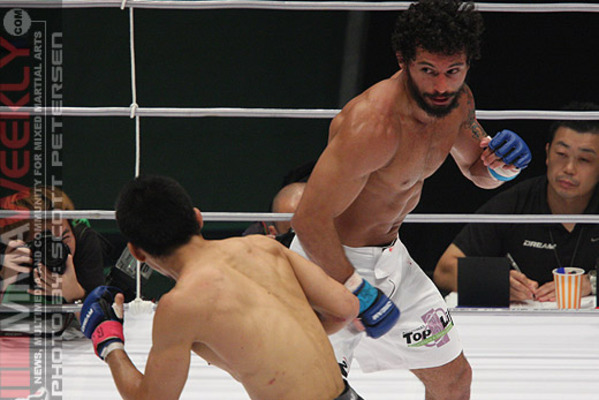 Adriano Martins is a Brazilian lightweight fighter currently fighting in the UFC. He has previously competed for Strikeforce, Dream and Jungle Fights. Martins holds a Brazilian Jiu Jitsu black belt under Cristiano Carioca. Despite his grappling pedigree, he has eleven wins by T/KO and only two by submission along with eleven decision victories.

Adriano has found much success in the Brazilian circuit, picking up multiple belts in Win Fight and Entertainment and Jungle Fight. he is perhaps best know for his appearance in the 2008 Dream Middleweight Grand Prix where he lost his first round fight against Sengoku welterweight champion, Keita Nakamura. After an eight year professional career, he made his US debut against Jorge Gurgel at Strikeforce's final event. He would go on to beat the long time Strikeforce veteran by decision.

Nearly a year later, after being picked along with a lot of Strikeforce fighters by the UFC, Martins made his UFC debut. On the UFC Fight Night 32 at November 9th 2013 in Brazil he faced Daron Cruickshank and defeated him via a second round submission to an armlock, also earning Submission of the Night honors.