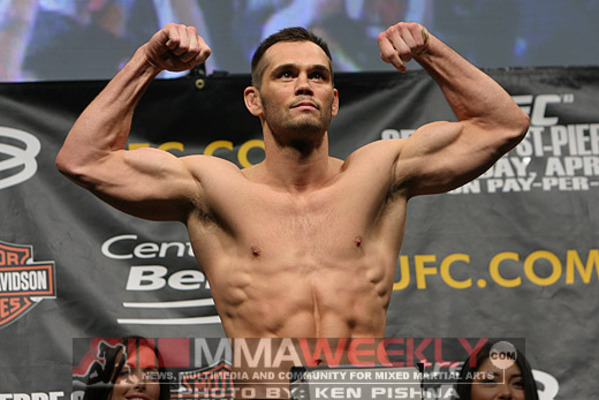 Rich Franklin is ineligible for regional rankings due to inactivity.
Fighters must have at least one completed MMA bout in the past two years to be ranked.

Franklin was born to Richard Sr. and Vaila Franklin. The couple divorced when Rich was five years old. He has one biological brother, Greg, and five step-siblings.

Prior to his first mixed martial arts bout in 1999, former UFC Middleweight Champion Rich “Ace” Franklin earned his master's degree in education from the University of Cincinnati and taught mathematics at the Oak Hills High School in Cincinnati, Ohio.  Franklin never planned on fighting as a career, but discovered his natural ability for it after practicing Karate since the age of 12.  He began his MMA training with his friends, the Rafferty brothers at their father's gym and after it's quick shutdown, kept his training alive in a shed on the Rafferty's property.  Rich decided to turn professional shortly after and burst onto the MMA scene with 13 straight victories without a loss.

After suffering the first setback of his professional career to future 205 lb. champion Lyoto Machida in Kobe, Japan, Franklin returned to the UFC in 2004 and after defeating Ken Shamrock at the Ultimate Fighter Live Finale 1, received his first title shot and won the UFC Middleweight Championship, defeating Evan Tanner once again, this time via strikes in the fourth round. It was the worst beating of Evan Tanner's career.  Rich went on to defend his title twice, however his 3rd title defense would prove to be a turning point in his career.

Franklin lost his title in grisly fashion in his third title defense to Muay Thai juggernaut Anderson Silva at UFC 64 in October of 2006. It proved to be a turning point not only for the two fighters, but for the division as a whole.  Rich earned a rematch with Anderson after defeating Jason MacDonald at UFC 68 and Yushin Okami at UFC 72.  After losing an equally lopsided rematch with “The Spider” in 2007 at UFC 77 in his home town, Franklin vacated the middleweight division in the hopes of becoming a title contender at 205 lbs.

Rich made his LHW debut again former training partner, Matt "The Hammer" Hamill at UFC 88.  Rich finished the fight in the 3rd round via TKO (body kick) and earned a shot at former PRIDE FC champion, Dan Henderson.  The two would fight at UFC 93 in the main event and the outcome, though somewhat controversial, put Rich on the losing end of a very close decision.  Rich would then go on to split his next two fights at catchweight against former PRIDE FC champion, Wanderlei Silva (win) at UFC 99 and former UFC champion Vitor Belfort (loss) at UFC 103.

Being the company man he is, Rich then accepted a fight on short notice to fight former UFC LHW kingpin, Chuck Liddell at UFC 115. After breaking his arm in the early stages of round one, Franklin went on to win via KO at 4:55 of that same round. Rich would then go on to lose a unanimous decision to former UFC LHW champion Forrest Griffin.  This fight would make Rich realize that while his frame allowed him to compete with the best in the division, he was best suited for one last title run at middleweight. Rich went on to win a rematch (at the catch weight of 190lbs) with Wanderlei Silva at UFC 147 and made his return to the Middleweight division  on Saturday, November 10th 2012 against Cung Le at UFC on FUEL TV 6.

After starting the opening stanza looking good, Franklin was caught with an over hand right hook that put the former champion out cold.  Though the loss was not his first TKO, it was the first time in his career he had ever been knocked unconscious.  The defeat has put question marks surrounding Franklin's next career move, as it derailed his one last title run aspirations in the Middleweight division.

Combining a large, athletic frame with pinpoint, powerful striking, a varied kicking and punching assault and excellent submission defense, Franklin holds notable career victories over Jorge Rivera by armbar, Nathan Quarry by knockout, Yushin Okami, Matt Hamill, Wanderlei Silva and Chuck Liddell. A loyal and responsible employee, Franklin is the UFC's go-to man for catch-weight bouts and late replacements against high-profile fighters, as when he stepped in on short notice to knock out Chuck Liddell after Tito Ortiz withdrew from the bout, citing injury.

Not only does Rich excel in the cage, but he also helps his community outside of it as well.  He is the co-founder of The Keep It In The Ring Foundation.  His foundation encourages non-violence through sports and life building tools, among other things.  Rich has dabbled in acting and is also a devoted Christian.  He is not only one of the most popular fighters in the UFC, but one of most liked by his peers and hopes to claim one more championship belt before he retires within the next couple years.

On September 28, 2015, after almost three years since his last fight, Rich took to Derek Jeter's site - theplayerstribune.com to announce his retirement. Rich noted that a factor in making this decision came from his mother's concern when he told her jokingly that he was working on scheduling another fight - Rich later found out that his mother didn't sleep at all that night. This caused Rich to do some self-reflecting and he came to the conclusion that he was "no longer 25" and that his "body has slowed down". Rich will now completely focus on continung his role as the Vice President of ONE Championship - an Asian MMA promotion.

Rich has defended the middleweight belt the second most times in UFC history next to Anderson Silva. He will surely be a quick entry into the UFC Hall of Fame, post-Zuffa fighter category. Rich has also starred in three movie. The first being; Cyborg Soldier, Rich plays a super soldier that is forced to escape from a military compound; he stars alongside Saved by the Bell star, Tiffani Thiessen. The next Rich played himself in the Matt Hamill bio-movie "Hamill". Rich most recently played an MMA coach in the 2014 comedy - Mantervention.

Video of Rich Franklin during his shoot for the January 2011 Fight! Magazine issue.