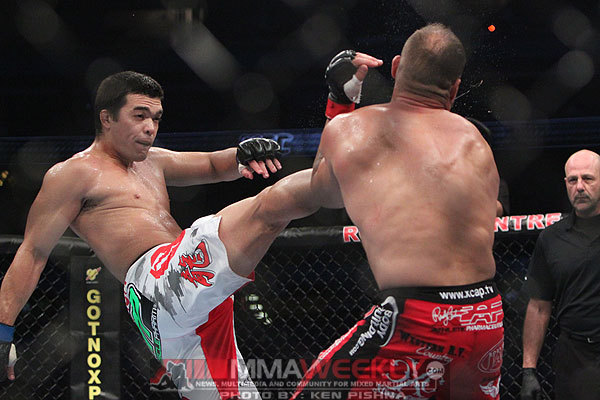 Fighting for a major organization has made Lyoto Machida ineligible for regional rankings.

Lyoto “The Dragon” Machida is one of the most skilled and elusive fighters in the history of mixed martial arts. His impressive list of victories includes former UFC Champions Rich Franklin, BJ Penn, Tito Ortiz, Rashad Evans, Mauricio Rua and Randy Couture as well as Thiago Silva, Stephan Bonnar, "The African Assassin" Rameau Thierry Sokoudjou, Ryan Bader and Dan Henderson. Machida made his UFC debut in 2007 after compiling an undefeated 8-0 record outside of the promotion, and eventually propelled himself to a position as the top contender at 205 lbs. with six straight victories. Machida knocked out then-champion Rashad Evans for the Light Heavyweight Championship at UFC 98 in May of 2009, becoming the promotion’s second undefeated fighter to win a world title.

Born in the Brazilian city of Salvador in 1978, Machida was the third son of the highly ranked head of the Brazilian branch of the Japan Karate Association, Yoshizo Machida. He earned his black belt in Machida Karate at the age of 13 and went on to win major world titles in sport Karate competition before transitioning to mixed martial arts in 2003. He comes from a traditional Japanese family. His first name means "Dragon" in Japanese which is where he got his nickname. Although he is known for his striking ability, he has only finished ten of his twenty wins with eight T/KOs. He has received some criticism for his use of urine therapy in which he drinks his own urine in the morning in order to stay fit.

While the base of his fighting style is traditional Karate, Machida is also an experienced practitioner of Sumo, Brazilian Jiu-Jitsu and western freestyle wrestling. He is able to combine these various disciplines into one of the most deceptive and difficult combative styles in the history of the sport. Although he has been criticized for retreating from opponents in the past, Machida often utilizes this technique to lull his opponents into a sense of complacency before launching an offensive striking assault of his own. His list of knockout victims is proof of his willingness to engage. However, his style has a key defect as he drops his rear hand as he punches on a retreat. This is likely due to that fact that in competitive karate tournaments points must be scored this way.

The first fighter to solve the Machida puzzle was vaunted Brazilian striker Mauricio Rua. In their first fight, Rua used powerful leg kicks to continuously back up Machida, taking away Machida's kicks as he needs to be coming forward to get power behind them. Machida did however threw enough punches to win a highly disputed decision. In their next fight Rua, knocked Machida out in the first round of their highly anticipated rematch to deal "The Dragon" his first professional loss and relieve him of his title in the process.

Machida would go on to lose a close split decision to Quinton "Rampage" Jackson where both fighters were very tentative due to each fighters respective one punch power. He next defeated Randy Couture with a crane kick in another highly anticipated fight. This was to be Couture's last fight before retirement. This win earned him a title shot against UFC light heavyweight champion, Jon Jones. After winning the first round against the champ, Machida was choked out by a standing guillotine in the second round. Machida rebounded from with a stunning second round knockout of Ryan Bader. At UFC 157, Lyoto would face Dan Henderson in the co-main event. He was coming off of a vicious knockout of Bader and Henderson was coming off of a long layoff in which he last tasted victory at UFC 139 in one of the greatest fights of all time against Mauricio Rua. Machida would earn the split decision victory over Henderson. He would follow that up with a decision loss to Phil Davis at UFC 163 in a very close and hard to score fight.

Machida was hoping to rebound again when he took on Mark Munoz in the main event of UFC Fight Night 30. Although this was his first time competing at middleweight, he was able to quickly finish his opponent with a head kick knockout that earned him "knockout of the night" honors. Machida would then have his sophmore fight at middleweight against Gegard Mousasi in the main event of UFC Fight Night 36. He would pick up the unanimous decision as well as the Fight of the Night bonus. Due to Vitor Belfort dropping out of the title fight against Chris Weidman, it would leave the opportunity for Machida to get the shot at UFC 175.

Machida lost the fight via unanimous decision. After Weidman had controlled much of the action throughout the first three rounds with his wrestling and relentless pressure, Machida began to find his range on his strikes in the fourth. Machida landed a number of hard strikes in the round including a left hook which stunned Weidman at the very end of the round. Machida would continue to find success striking early in the fifth as well. However, Weidman would land several hard shots of his own later in the round before seemingly clinching the round with a takedown and controlling Machida from top position for over a minute, although Machida managed to stand up and attack with a flurry of strikes in the closing seconds of the round. Despite losing on the scorecards, Machida earned his third Fight of the Night bonus award for his performance. Machida statde after the fight that he took to long to turn up the intensity and that it cost him the fight.

Machida looked to rebound by taking on C.B. "The Doberman" Dollaway at UFC Fight Night 58: Machida vs. Dollaway on December 20th. The fight with Dollaway would only last 1:02 into the first round where Machida hit Dollaway with a liver kick and would finish with strikes to earn the TKO victory. It would also earn Machida a Performance of the Night bonus.