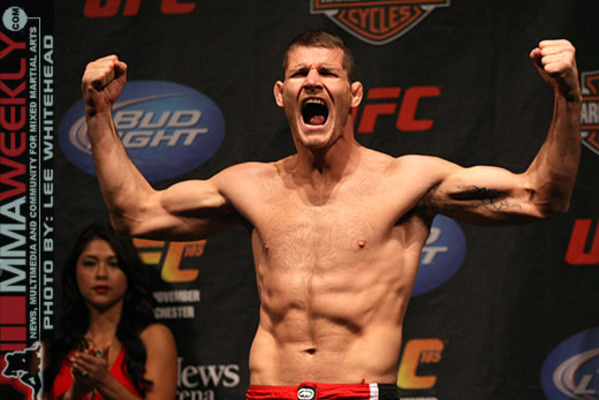 Michael Bisping is ineligible for regional rankings due to inactivity.
Fighters must have at least one completed MMA bout in the past two years to be ranked.

Michael Bisping, who fights out of the now-famous Wolfslair MMA Academy in Liverpool, England, first began fighting professionally for various MMA promotions in his home country, including Cage Rage, where he ran his professional record to an easy 10-0 with 10 finishes before competing on The Ultimate Fighter 3 and winning the light heavyweight tournament for his UFC contract. Bisping won two more UFC fights by TKO before scraping by Matt Hamill in a very close and controversial Split Decision in 2007. He then lost the first fight of his professional career when he came up short in another Split Decision to future champion “Sugar” Rashad Evans.

After the Evans fight, Bisping dropped down to 185 lbs., winning three straight fights with his trademark relentless, swarming style. On his biggest stage to that point, however, and following months of back-and-forth trash-talking, Bisping suffered a setback when he was knocked out in stunning and dramatic fashion by Dan Henderson at UFC 100 in July of 2009. The loss to Henderson led to questions of whether or not Bisping deserved to remain the face of U.K. mixed martial arts, but he has since gone an impressive 3-1 in the organization. The most recent of these was a main event unanimous decision victory over judoka Yoshihiro Akiyama at the UFC 120 event in London, England. On a night when many hometown fighters were defeated, Bisping saved the day by outpointing a game Akiyama in a bout that won fight of the night honors.

Primarily a kickboxer, Bisping combines excellent foot movement, striking accuracy, and an underrated grappling and submission game to great effect inside the cage, having defeated notable UFC fighters such as Eric Schafer, Chris Leben, and Denis Kang during his time with the promotion. Bisping is tenacious and sets a high pace, and at his best moves seamlessly between the standing and ground games to disorient his opponents. Although some fans believe he has a suspect chin after the devastating loss to Henderson and another to cage legend Wanderlei Silva (by Unanimous Decision), Bisping continues to compete on a regular basis in the hopes of realizing his dream of becoming the first UFC champion from the U.K.

At UFC on Fox: Evans vs. Davis, Bisping squared off against fellow middleweight contender Chael Sonnen in what was tabbed a number one contender's bout for the UFC Middleweight Championship. In a very competitive bout he dropped a unanimous decision to Sonnen. However, in defeat Bisping was still praised for his performance as many people scored the bout for him including UFC president Dana White. He was able to parlay this momentum into a match up against another middleweight contender in former WEC Light Heavyweight Champion Brian Stann. The two met at UFC 152 and the fight saw Bisping outwork Stann to a unanimous decision victory. Following this win, Bisping continued to campaign his case for an eventual title shot against middleweight kingpin Anderson Silva. However he had a misstep when he faced off against Vitor Belfort at UFC on FX 7 when he was finished in the second round with a head kick TKO.

Bisping looked to get back in the win column when he faced Alan Belcher as the Co-Main event of UFC 159. The fight would be stopped when Belcher received and accidental poke to the eye and doctors would not let him continue. So the fight would go to a decision before the third round was over and Bisping would win by a Technical Decision. Bisping was getting the better of the stand up for all three rounds before the eye poke. His next fight would be the Main Event of the Ultimate Fighter Canada vs. Australia finale against Tim Kennedy, and Kennedy would use his wrestling to pick up the decision win over Bisping. The Count would get back in the win column with a dominant performance over Cung Le getting the TKO finish in the 4th round and securing a Performance of the Night bonus in the process. He will look to make it two straight when he faces Luke Rockhold at UFC Fight Night 55.

Episode 4 Bisping def. Kristian Rothaermel by TKO (Strikes) at 3:51 of Round 1

Episode 12 Bisping def. Ross Pointon by Submission (Strikes) at 2:13 of Round 1

Who would have thought that back in the day?! The success story Michael Bisping has left for the world to see is really one of the most beautiful, heartwarming and inspiring cinderella stories of MMA history.

As Bisping notoriously lost his contender match ups in devastating fashion (Henderson, Belfort, Sonnen, Kennedy and Rockhold) the UFC title was in no reach for him as it seems for a long time.

Therefore the magic and the beauty of it happening in the end. Where all the hard work and perseverance paid off big time for him.

But first he had to fight against Anderson Silva at UFC Fight Night 84 where Bisping was on the receiving end of a spectacular flying knee which he was able to withstand even without having a mouthpiece at that moment of the fight. Anderson thought of the fight as won and went on celebrating on the rim of the cage. Referee Herb Dean did a fabulous job refereeing that fight he did not stop the fight and the 3rd round finished. Michael Bisping went on and won against Anderson via unanimous decision. Leaving us with one of his most iconic images of him celebrating as his face was bloody and his noose shattered after the fight.

At the time Luke Rockhold was the defending UFC middle weight champion. He was scheduled for the rematch with Chris Weidman at UFC 199. But two weeks out of the fight Weidman had to announce his withdrawal due to injury.

Michael Bisping stepped up and took the fight against UFC middle weight champion Luke Rockhold on a 11 days notice after the UFC had basically asked all the other top contenders of the division but couldn't get a matchup in that short time period.

The pre-fight press-conference before their fight at UFC 199 is legendary. Michael Bisping clearly gets the better of that as he counters Luke's over confident "believe - achieve" speech.

Michael Bisping won the UFC middle weight title defeating Luke Rockhold against all odds via K.O. in the first round.

He went on to say that he won the fight due to perfect preparation by his coach Jason Parillo and thanks to the late notice he did not overtrain for that fight as he felt he did in the past a lot.

His joy and exhilaration will be always one of the nicer memories of UFC history as his career is that of a true fighter who never gave up his dream of accomplishing greatness and being a UFC champion.

After that Michael Bisping went on to defend his title against Dan Henderson in their rematch at UFC 204, via unanimous decision.

Dan Henderson said before the fight that no matter the outcome he would retire after that fight which he did.

Michael Bisping got his super fight when George Saint Pierre announced his return to the UFC and challenged him for the UFC middle weight title. Again Bisping delivered a legendary prefight press conference where he appeared to be slightly intoxicated but always fun.

He lost the fight and his title at UFC 217 against George via submission in the third round.

Bisping did not dwell much on the loss and wanted a quick turn around. He accepted to fight Kelvin Gastelum at UFC Fight Night 122 in Shanghai just barely one month after being choked out.

He lost the fight via K.O. in the first round. As a consequence of these two losses and the fact that his eye wasn't getting any better and his "good" eye starting to having some issues Michael Bisping decided to retire from MMA.

Michael "The Count" Bisping tells Fight! Magazine what he thinks about being considered a bad guy to MMA fans.