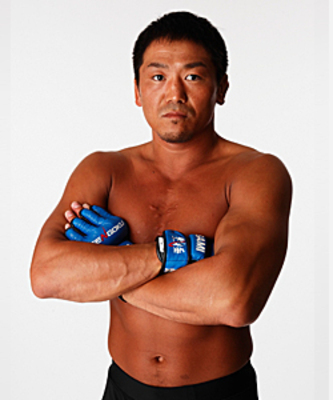 Kazuo Misaki is ineligible for regional rankings due to inactivity.
Fighters must have at least one completed MMA bout in the past two years to be ranked.

Undoubtedly one of the best Japanese mixed martial artists to ever compete, Kazuo Misaki is also probably one of the most underappreciated. He never gained widespread acclaim during his time in the Pride Fighting Championships, as he was often relegated to the lesser known Bushido series rather than the higher profile pay-per-view cards. In addition to a win over Ed Herman during his time with Pancrase, Misaki enjoyed his greatest wins in the 2006 Pride Welterweight (185 lbs.) Grand Prix, which he won by defeating Phil Baroni, Dan Henderson, and Denis Kang.

Since the collapse of Pride in 2007, Misaki has predominantly continued to fight in Japan, fighting for Sengoku Raiden Championships and DEEP.

On March 19, 2009, Misaki was pulled over by a police officer for talking on his cell phone while driving, when pulling over Misaki attempted to flee the scene, knocking into the arresting officers' car. On June 26, the Tokyo District Court sentenced him to one year of prison, which has been suspended for three years.

Although his greatest offensive weapon would probably be his submission game, Misaki is known for being incredibly difficult to finish, with only some of the best fighters in the world being able to do so. In fact, the only “knockouts” on his professional record have come by way of a broken arm in 2002, a controversial referee stoppage in 2009, and a corner stoppage in 2010.

At DEEP - Haleo Impact on December 22, 2012 there was a retirement ceremony held for Misaki as his last bout would be a kickboxing exhibition against former teammate Akihiro Gono. The event was attended by numerous Japanese martial arts legends such as Tatsuya Kawajiri, Satoru Kitaoka, Hayato Sakurai, Hirota Mizuno, Shintaro Ishiwatari, Masakazu Imanari, Kozo Takeda, Riki Fukuda, Kyokushin president Kancho Matsui, Shootboxing president Takeshi Siza and many more. Even though it was an exhibition match, both Gono and Misaki cut weight for the event. They traded light punches and kicks for a round with shin pads, then took them off for a second which saw the two engage more heavily to the delight of the audience. The final moment of the ceremony came when Misaki threw the mic down on the mat behind him and stepped up to the ropes, holding them with both hands in a resolute stance. He looked out to the audience and shouted a thunderous thank you. Then he bowed.