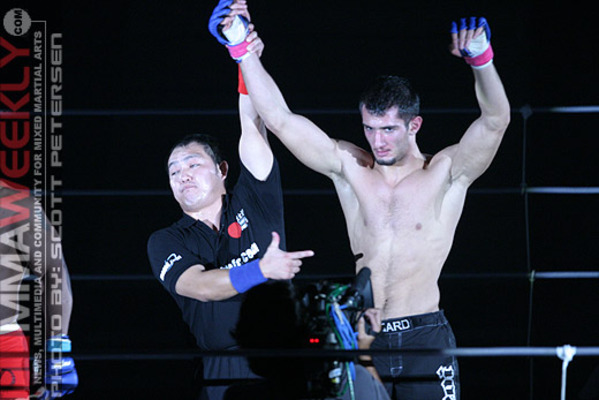 Fighting for a major organization has made Gegard Mousasi ineligible for regional rankings.

Gegard Mousasi began competing in mixed martial arts in 2003 at the age of 18, running his professional record to 12-1-1 before debuting for the Japan-based Pride Fighting Championships in 2006. Mousasi competed in the Pride 2006 Welterweight (183 lbs.) Grand Prix, but was defeated in the tournament semifinals by Japanese standout Akihiro Gono by Armbar. Since his loss to Gono, Mousasi has established himself as one of the premier fighters in the world.

He has notable wins over Hector Lombard, Evangelista Santos, Denis Kang (Triangle Choke), Melvin Manhoef (Triangle Choke), Ronaldo Souza, Mark Hunt, Renato Sobral, and "The African Assassin" Rameau Thierry Sokoudjou. He has fought for numerous promotions including Two Hot Two Handle, M-1, Rings, Deep, Pride, Cage Warriors, Bodog, Dream and currently Strikeforce. He holds a Black belt in Judo. He currently trains out of Team Jurojin in the Netherlands but also works with Red Devil Sports Club from Russia and Golden Glory, also out of the Netherlands. He has also dabbled in Kickboxing, earning a record of 8-0.

One of the most effective finishers in active competition, Mousasi has been to decision only a handful of times in his professional career, preferring instead to finish his fights either by knockout, TKO, or submission. After spending the first part of his career competing in the middleweight division, Mousasi has since alternated between the light heavyweight and heavyweight divisions, citing his growing frame and the hunger for greater challenges as reasons for his move.

He has held numerous important titles throughout his career. He won the Dream Middle and Light Heavyweight championships as well as the 2008 Dream Middleweight Grand Prix and the 2010 Dream Light Heavyweight Grand Prix. This makes him the first and only person to hold two Dream titles. He was the Cage Warriors Middleweight Champion in 2006. He was the Netherlands Amateur Boxing champion at the age of 16 with a record of 12-1 with nine knockouts.

Mousasi's reign as Strikeforce champion was short lived though as he would drop the title in his first attempt to defend it to Mo Lawal. The loss snapped an impressive 15 fight win streak for Mousasi, but since that loss Mousasi has started another unbeaten streak of 4 fights which includes three finishes, a unanimous decision and a draw.


He faced off against  Mike Kyle at Strikeforce's last event in January, 2013. He was able to make short work of him, submitting him via rear naked choke late in the first round. Mousasi has since been named one of the list of fighters that will be getting a contract with the UFC now that Strikeforce held it's final event.

On January 19th, 2013, it was announced by several MMA publications that Gegard would be competing in the UFC against Light Heavyweight prospect Alexander Gustafsson. The fight was expected to happen at UFC on Fuel TV 9, and to be held in in Stockholm's Ericsson Globe Arena. However Gustafsson would sustain an eye injury leading to the fight cancellation. Illir Latifi would step in on late notice to make the Main Event a debut for both fighters. Mousasi would go on to win a one sided Unanimous Decision. He would face a real test in his next bout when he took on former light heavyweight champion Lyoto Machida and would come up short losing the decision. He would get back in the win column when he faced Mark Munoz in his third straight Main Event fight picking up the decision. Mouasasi's next fight would once again be the main event for his 4th straight time. However this time he would lose in a rematch to Ronaldo Souza getting caught in a guillotine in the third round.

He would bounce back with a first round TKO over Dan Henderson earning a Performance of the Night bonus.