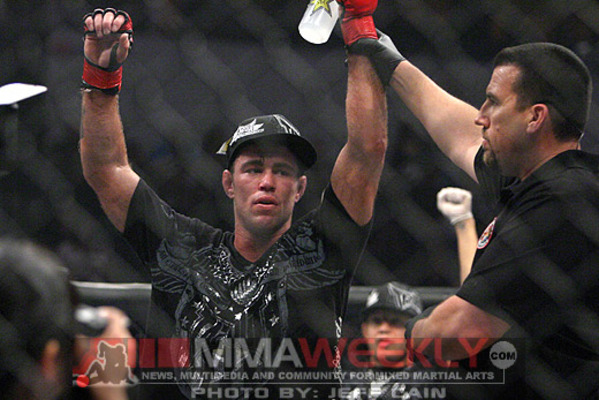 Jake Shields is ineligible for regional rankings due to inactivity.
Fighters must have at least one completed MMA bout in the past two years to be ranked.

Jake Shields is one of the most gifted submission fighters in the world of professional mixed martial arts. A black belt under the renowned Cesar Gracie, Shields began his fighting career in 1999, running his record to a respectable 11-4-1 before putting together one of the longest and most impressive undefeated streaks in MMA history. Beginning with a win over Toby Imada in 2004, Shields went undefeated for over six years, defeating Dave "The Warrior" Menne, Yushin "Thunder" Okami, "The Natural Born Killer" Carlos Condit, Paul "Semtex" Daley, "Ruthless" Robbie Lawler, Jason "Mayhem" Miller, and former UFC and Pride Champion Dan "Hendo" Henderson along the way. His impressive resume includes fights for Shooto, Pancrase, Rumble on the Rock, Bodog Fight, Dynamite, EliteXC, Strikeforce, and the UFC. He has held belts in Gladiator Challenge, Shooto, Rumble on the Rock, EliteXC (twice, and Strikeforce (twice).

Though limited in his standup, Shields is one of the most powerful and dangerous submission fighters in the welterweight and middleweight divisions. While many BJJ black belts enjoy fighting from their back, Shields has combined his Jiu-Jitsu game with his amateur wrestling skills and prefers to suffocate opponents from mount before transitioning to fight-ending submission holds. He served as a grappling coach for Chuck Liddell on season 11 of The Ultimate Fighter

Shields would win a Split Decision victory over Martin "Hitman" Kampmann in his UFC debut which ended up earning him a title shot. He would come up short against Georges "Rush" St. Pierre in the title fight losing by Unanimous Decision. He would also drop a match to Jake "The Juggernaut" Ellenberger losing in the first round and it was the first time he had been finished in over 10 years. His father and manager had passed away a few weeks prior to this fight. Shields would bounce back with back to back Unanimous Decision victories over "Sexyama" Yoshihiro Akiyama and Ed "Short Fuse" Herman. He would however announce that he tested positive for a banned substance in the Herman fight and would be suspended for 6 months and have the fight changed to a No Contest. He would come back from his suspension and win a Split Decision over Tyron "The Chosen One" Woodley at UFC 161.

Shields took on fellow grappling ace, Demian Maia, in the main event of UFC Fight Night 29. In a close but uneventful fight, Shields was able to control most of the grappling exchanges and ultimately win a split decision. He would then take on "Lightning" Hector Lombard at UFC 171. He was unable to get much going and was defeated by Unanimous Decision.

Much to the surprise of many fans, the UFC released Jake Shields on April 7th, 2014. It wouldn't be long before he was picked up as it was announced on April 17th that he signed a multi fight deal with the World Series of Fighting.

Shields was expected to make his WSOF debut against Jon Fitch but was forced to pull out of the bout with an injury. He finally made his WSOF debut on October 11th, 2014 at World Series Of Fighting 14 in the main event slot opposite of Ryan Ford, Fortunately for Shields he was able to secure the victory via first round submission.

It has been confirmed that Shields' upcoming bout against Brian Foster at WSOF 16 shall serve as the number one contender's bout with the winner facing the winner Jon Fitch versus Rousimar Palhares.