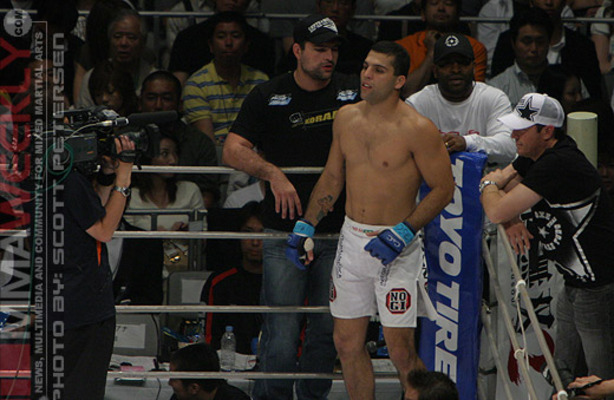 Murilo Rua is ineligible for regional rankings due to inactivity.
Fighters must have at least one completed MMA bout in the past two years to be ranked.

Much like his younger brother Mauricio, Murilo Rua began as a promising young prospect out of the famed Chute Boxe Academy in Brazil. After amassing a 6-0-1 record en route to his Pride FC career, “Ninja” was considered by many a star in the making. The young fighter with a seemingly endless gas tank defeated some notable middleweights throughout his career, including Mario Sperry and Joey Villasenor. However, “Ninja” soon ended up on the receiving end of some particularly brutal knockouts, including KOs at the hands of Sergei Kharitonov, Robbie Lawler and Benji Radach. His upward progression stalled, and “Ninja” has not reached the same level of success as his brother “Shogun.”

Probably the most notable moment of Rua’s career—besides winning the middleweight title in the now-defunct EliteXC organization—came during a Split Decision loss to Quinton “Rampage” Jackson in 2005, a fight that many in attendance, including Jackson himself, felt Rua had won.

Although he has proven susceptible to powerful strikers throughout his career, Rua is a talented fighter, having finished a near-even number of fighters with strikes and submissions during his career. He bears all the hallmarks of a Chute Boxe product: fearlessness, viciousness, well-developed striking, good conditioning, and a refusal to move in any direction but forward.