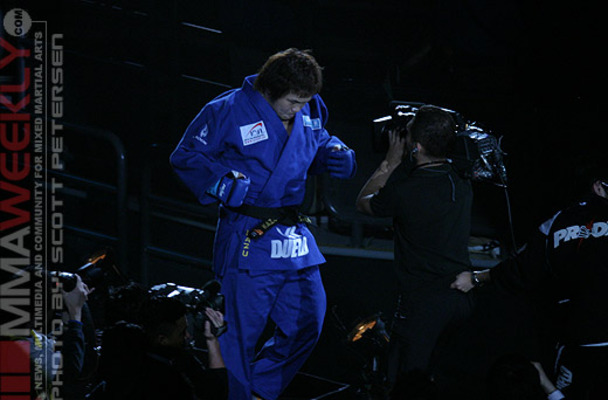 Kazuhiro Nakamura is ineligible for regional rankings due to inactivity.
Fighters must have at least one completed MMA bout in the past two years to be ranked.

Kazuhiro Nakamura is a Japanese mixed martial artists currently competing as a middleweight. His primary style is judo, in which he holds a 3rd dan black belt under Hidehiko Yoshida. He fights out of the Yoshida Dojo and has previously competed in PRIDE FC, the UFC and Sengoku Raiden Championships.

Nakamura made his MMA debut at PRIDE 25 against Antonio Rogerio Nogueira, losing by submission in the second round. He has also lost to Nogueira in a rematch at PRIDE Bushido 4. His career in PRIDE was notable for fighting many of PRIDE's top fighters, including Wanderlei Silva, Mauricio Rua and Dan Henderson. He holds notable victories over Igor Vovchanchyn, Yuki Kondo, Kevin Randleman and Murilo Bustamante. His final fight in PRIDE was a decision loss to Mauricio Rua at PRIDE Shockwave 2006.

Nakamura made his debut in the UFC at UFC 76 against Lyoto Machida, losing the fight by unanimous decision. Nakamura tested positive for marijuana during the UFC 76 drug testings. His next fight in the UFC was a loss by TKO due to injury to Rameau Thierry Sokoudjou at UFC 84. He was subsequently released by the promotion.

After a three fight losing stint which included losses to future UFC light heavyweight champions Lyoto Machida and Maricio Shogun Rua, Nakamura decided to debut at a new weight class (middleweight) after having spent his entire career at light heavyweight. Nakamura debuted at Sengoku - Fifth Battle as an entrant in the Sengoku  2008 Middleweight Grand Prix eliminating Paul Cahoon by unanimous decision. He returned at Sengoku - Sixth Battle as part of the final four. Nakamura defeated fellow countryman Yuki Sasaki via unanimous decision and booked a spot later that evening in the final. Nakamura fought against tournament favorite Jorge Santiago and took him to the third round before losing via TKO at 0.49. Nakamura Returned at Sengoku - Ninth Battle in a title eliminator that saw the winner rematch champion Jorge Santiago. Nakamura was stunned by Kazuo Misaki and lost via submission in the first round.

A farewell event for Nakamura's teacher, legendary judoka, Hidehiko Yoshida, was held on April 25, 2010. Nakamura defeated Yoshida via unanimous decision. Nakamura made his return at DREAM 17 to face UFC veteran Gerald Harris. He lost the fight via split decision.

On October 19, 2012, Nakamura debuted in DEEP where he defeated Ryuta Sakurai by majority decision. On February 16, 2013, Nakamura defeated Young Choi to win the vacant DEEP Middleweight Championship, and the first title of his career.

Following his title victory, Nakamura ran off three straight wins. He first defeated Daijiro Matsui via KO at DEEP: King Kaz Fight in Fukuyama on June 30, 2013. He then beat Henry "Sentoryu" Miller via KO at DEEP: 63 Impact on August 25, 2013. Nakamura then closed out a perfect 4-0 run for 2013 by defeating Yuji Sakuragi via arm-triangle choke at DEEP: Cage Impact 2013 on November 24, 2013.

2014 would prove to be a rough year for Nakamura, as he lost two of his three fights. He was defeated in his first bout of the year at DEEP: 65 Impact, where he lost to Ken Hasegawa via Majority Decision. The fight was for the DEEP Megaton championship. Nakamura would bounce back from that loss by besting Seigo Mizuguchi via TKO at DEEP: Cage Impact 2014 on July 21, 2014.

Nakamura's next fight would prove to be his last. It took place at DEEP: 70 Impact on December 21, 2014; Nakamura lost the fight and his DEEP Middleweight championship via Unanimous Decision to Yoshiyuki Nakanishi. Nakamura would retire following this loss.