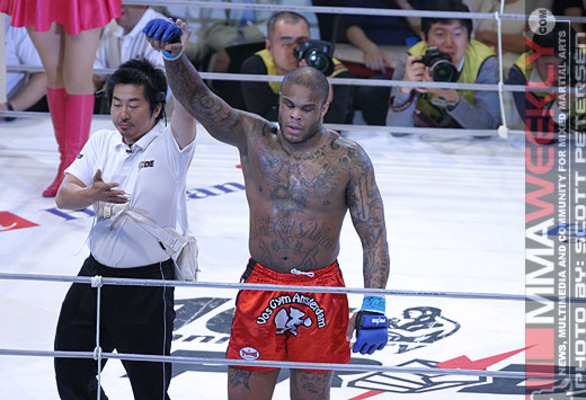 #95
Greatest MMA Striker of All Time

Gilbert Yvel is ineligible for regional rankings due to inactivity.
Fighters must have at least one completed MMA bout in the past two years to be ranked.

An extremely powerful striker who has yet to win a bout by decision after well over a decade of active competition, Gilbert Yvel made his professional debut in 1997 and went on to become one of the most prominent heavyweight fighters in Rings and Pride FC. Yvel sports notable career victories over Semmy Schilt, Cheick Kongo, and Pedro Rizzo, among others. Utilizing his natural power and striking training at the legendary Vos Gym in the Netherlands, Yvel is one of the most dangerous heavyweights in the world standing up. Yvel continues to fight today, though he has come up short against top competition in recent years. Josh Barnett, Junior Dos Santos and Ben Rothwell have each added losses to Yvel's resume, the last two doing so on UFC main card affairs.

Yvel has made a less positive name for himself as a result of his frequent trouble with athletic commissions and in-the-ring conduct. Yvel has been disqualified in three bouts during his career for offenses ranging from biting his opponent and eye gouging to knocking out the referee. Although Yvel has been on his best behavior for several years, some athletic commissions are still weary of granting him a license to fight in their state for fear of his volatile nature and aggressive reputation.