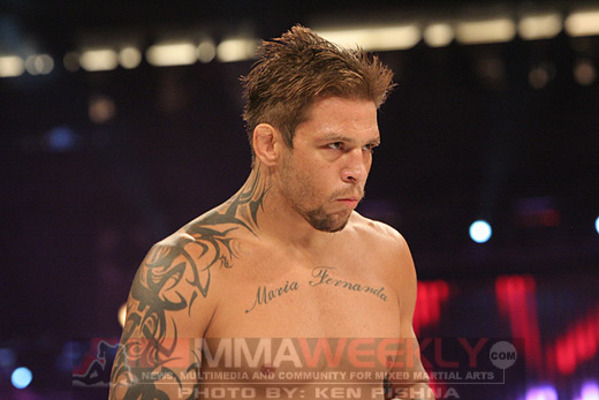 Renato Sobral is ineligible for regional rankings due to inactivity.
Fighters must have at least one completed MMA bout in the past two years to be ranked.

Babalu started off as a heavyweight and was up to as much as 240 lbs early on in his career. He participated in both of the RINGs KOK tournmaments and was runner up int he first one.  He lost to Dan henderson in the finals in an odd decision in which Dan was given then nod despite there being two judges who scored it as a draw.  It was after the second tournament that he went down to Light heavyweight. It was also around that time that he fought Brad Kohler in the WEF in which there was the then-famous soccer kick that KOed Kohler.

One of the most experienced fighters in the light heavyweight division, Renato “Babalu” Sobral began competing professionally in 1997, running his record to a stellar 16-2 before debuting for the UFC in 2000. During his time with the U.S.-based organization, Sobral competed against some of the premier light heavyweights of the time, including former UFC Light Heavyweight Champion Chuck Liddell (twice), Chael Sonnen, and Travis Wiuff. Sobral was cut from the organization in 2007 after failing to release a submission hold after the referee tried to intervene in his fight with David Heath at UFC 74. In the post fight interview, Sobral told Joe Rogan that he was aware Heath had tapped, but said, "He has to learn respect. He deserved that."

A black belt in Brazilian Jiu-Jitsu, Sobral holds notable career wins over the aforementioned Sonnen, Wiuff, Mauricio “Shogun” Rua, Mike Whitehead, and Rameau Thierry Sokoudjou, demonstrating his penchant for chokeholds in a majority of his wins. In 2003, he was able to defeat Trevor Prangley, Mauricio Rua and Jeremy Horn all in one night. Prior to his second fight with Chuck Liddell, which he lost via first round knockout, “Babalu” had compiled a 10 fight winning streak, one of the most impressive such streaks in top level professional MMA competition. He is also a former Strikeforce Light Heavyweight Champion. Only one of his losses has been to someone who has not held a title in Pride, UFC, WEC or Strikeforce.

In August of 2012 it was announced that Babalu would be competing for Bellator in their 2013 light heavyweight tournament. He faced Mikhail Zayats in the opening round. After both fighters spent most of the first round clinching against the cage, Zayats hit Babalu with a spinning back fist and then knocked him down and landed a series of unanswered punches, which prompted the referee to stop the fight. This was Sobral's only second fight in over 2 years and also the third time he was T/KO'd in the first round in his last 5 fights.

On June 19th 2013, after a loss to Jacob Noe "Babalu" announced his retirement from MMA. In the tradition of wrestlers who leave their wrestling shoes on the mat after their last match,"Babalu" left his MMA gloves at the center of the cage,saluted the crowd and made his way out of the cage. Though ending his career on a 2-4 stint and a record of 37-11. The 37-year old made his name off of wins over Chael Sonnen, Shogun Rua, Jeremy Horn and Robbie Lawler.

Affliction profiled Brazilian groundfighter "Babalu" Sobral, speaking to him about his origins in the sport of MMA and training habits.