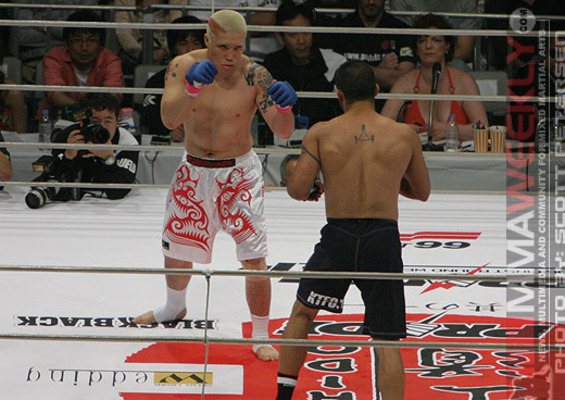 Ryo Chonan is ineligible for regional rankings due to inactivity.
Fighters must have at least one completed MMA bout in the past two years to be ranked.

Ryo Chonan made his professional fighting debut in 2001 for the famed Pancrase organization, but did not garner attention until he put together a successful record in DEEP, defeating Japanese legend Hayato Sakurai in 2003. Chonan’s greatest performances, however, came during his Pride FC career, where he defeated Carlos Newton, Roan Carneiro, and Joey Villasenor, and became one of only two men in history to finish future UFC Middleweight Champion and all-time great Anderson Silva. At that time in Chonan's career, he was regularly being matched up with the best fighters Pride had to offer. A stint in the UFC following Pride's demise went less successfully for Chonan, who was released after a lackluster 1-3 record in the Octagon.

Chonan, who was not known for his knockout or submission ability—having won the majority of his bouts by decision—is still best known for his third-round Flying Scissor Heel Hook submission of Silva in a fight he was likely losing on the judges’ scorecards. Chonan’s Heel Hook was so tight that Silva tapped immediately upon hitting the ground without attempting to escape from the hold. It remains one of the great submissions in MMA history.