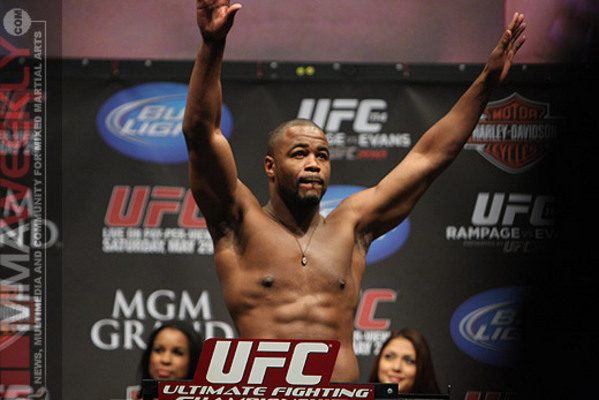 Fighting for a major organization has made Rashad Evans ineligible for regional rankings.

After beginning his professional fighting career in 2004 in Iowa, Rashad Evans caught his big break in 2005 when he competed in and won the heavyweight tournament of The Ultimate Fighter 2 on Spike TV, defeating heavy favorite Brad Imes in the live, televised finale. Although he was not a fan favorite fighter at the start of his UFC career, after dropping down to the light heavyweight division and amassing an undefeated record with close decision wins over Sam Hoger and Stephan Bonnar, Evans began to garner serious attention. He also began to make noticeable improvements in his striking, defeating the bruising Jason Lambert and former wrestling star Sean Salmon by knockout in back-to-back appearances in 2006-2007. Evans then rapidly assaulted the top of the light heavyweight ladder, defeating Michael Bisping and then reeling off back-to-back knockout wins over former champion Chuck Liddell and then-champion Forrest Griffin in 2008 to take the UFC Light Heavyweight Championship. Although he lost the belt in his first title defense to undefeated contender Lyoto Machida, Evans remains one of the top light heavyweights in the world.

After winning the National Junior College Wrestling Championship in 2000, Evans transferred to Michigan State University and wrestled for the Spartans, earning a 48-34 record and becoming one of only four men to defeat wrestling legend Greg Jones. Since transitioning to MMA in 2004, Evans has rapidly evolved into one of the most complete fighters in the light heavyweight division, combining his natural speed and wrestling ability with devastating knockout power and a Brazilian Jiu-Jitsu black belt from Rolles Gracie. Evans was involved in one of the most public feuds in MMA history with fellow light heavyweight Quinton “Rampage” Jackson after an in-cage altercation in 2009 and a competitive coaching battle on The Ultimate Fighter 10. His knockout of “The Iceman” Chuck Liddell remains one of the most replayed finishes of all time.

Evans began a 4 fight win streak with a decision victory over Thiago Silva. He would go on to defeat Quinton Jackson by decision before finishing Tito Ortiz by TKO in a Fight of the Night at UFC 133. His next win over Phil Davis would secure him a title shot against Jon Jones. They were training partners at one point but Evans ended up leaving Greg Jackson's camp and there was a lot of bad blood between Jones and Evans leading up to the fight. Evans would end up losing his title bid by Unanimous Decision and would also drop his next fight the same way to Antonio Nogueira.

Rashad beat Dan Henderson via split decision in the main event of UFC 161. He would follow that up with a first round TKO finish of Chael Sonnen at UFC 167. He was set to take on fellow FOX analyst, Daniel Cormier, at UFC 170, but had to pull out ten days before the fight with a leg injury.