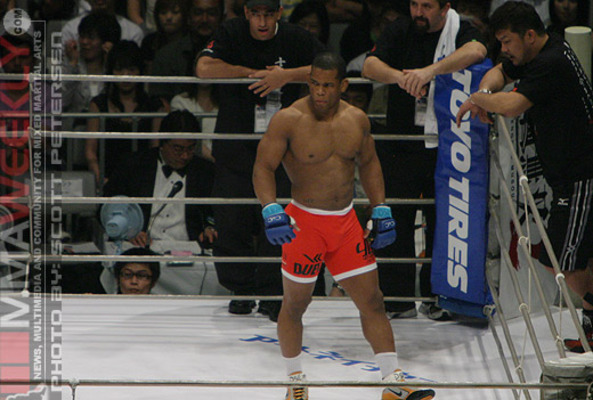 Fighting for a major organization has made Hector Lombard ineligible for regional rankings.

Hector Lombard is a fourth degree black belt in Judo and has competed in the Olympics for his home country (Cuba) in the sport. Sporting a black belt in Brazilian Jiu Jitsu as well, Lombard started training in MMA and currently trains in Florida out of the American Top Team camp.

The Judoka, who has fought in many different organizations from CFC to DEEP, PRIDE FC to Bellator and finally making it to the UFC, started his MMA career in 2004.  Lombard would win seven of his first nine pro bouts, one NC, before facing Gegard Mousasi in PRIDE.  Lombard would go on to lose this fight, making it his 2nd loss in four bouts and putting his record in PRIDE at 0-2.  Lombard answered any questions anyone had by going on one of the most impressive runs ever in MMA, going on an unprecedented 25 fight streak with out a loss.

During Lombard's streak of dominance, major western organizations started to take notice.  Lombard signed with Elite XC, only to have the company crumble financially prior to his first fight.  He then went on to sign with Bellator FC, where after two wins, he would fight Jared Hess for the promotions first ever middleweight title.  Lombard defeated Hess and went on to defend his title and become the first ever champion in the promotions history to successfully do so.  After going 8-0 in Bellator, Lombard's contract expired with Bellator and he would move on.

Lightning Hector Lombard would make his UFC debut at UFC 149 against Tim Boetsch, replacing an injured Michael Bisping. The performance he put on was not his typical aggressive showing and he would go on to lose a split decision. With the loss came an end to his 25 fight unbeaten streak.  Lombard's second UFC fight was scheduled against Rousimar Palhares at UFC on FX 6, where he won by first round knockout, giving him his first UFC win of his career. However he would be upset by underdog Yushin Okami in his next fight and lose for a second time in the UFC by Split Decision. He would make his welterweight debut at UFC 166 against Nate Marquardt. He would pick up his second UFC win when he got the TKO in the very first round. His next win would help move him up the ranks as he was able to defeat Jake Shields by Unanimous Decision at UFC 171.

Following his victory over Shields, Lombard would be slated to face Dong-Hyun Kim at UFC Fight Night 48. However, an injury to Lombard would ultimately lead to his replacement. After recovering, Lombard was then slated to face UFC veteran making his return to the octagon after a six-year absence, Josh Burkman. The bout is set to take place at UFC 182.

On March 23rd 2015 Hector Lombard was suspended for 1 year by the Nevada State Athletic Commission after testing positive for steroids following his last fight against Josh Burkman at UFC 182 on January 3. The NSAC also fined him $17,649 which is 1/3 of his $53,000 fight purse and his $50,000K win bonus has been revoked as well as the win being overturned to a no-contest and his bout vs Rory MacDonald at UFC 186 has been cancelled.