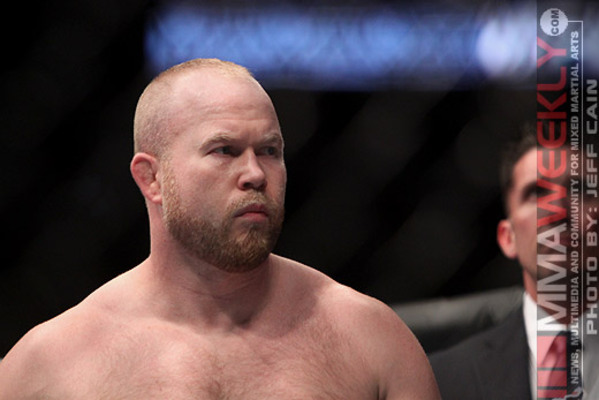 Tim Boetsch is ineligible for regional rankings due to inactivity.
Fighters must have at least one completed MMA bout in the past two years to be ranked.

After running his professional record to 6-0 on the New Jersey circuit, Tim Boetsch caught his first big break when he earned a spot in the IFL promotion in 2007. Unfortunately, Boetsch was defeated in his only fight with the IFL by veteran Vladimir Matyushenko. Following the collapse of that promotion, Boetsch was invited to join the UFC, and earned respect from fans and media with a slam knockout of David Heath in his Octagon debut.

Boetsch, who has a solid base in high school wrestling, even winning four state wrestling titles, is known for his aggression and raw physical strength and tenacity. Although he was cut from the UFC in 2009 after going 2-2 with the promotion, he battled his way back in for a new contract and many more significant wins in the organization. Boetsch is currently riding a 4 fight win streak over some tough competition. He won a Unanimous Decision over Kendall Grove and also handed Nick Ring his first loss in a Unanimous Decision victory.

Boetsch would then face off against Yushin Okami in a fight that he was an underdog in. Boetsch was taking punishment and probably losing the fight on the judges score cards when he came out in the 3rd round like an animal. He pulled off the upset with a TKO over Okami helping to move him up the rankings. His next test would come against Bellator standout Hector Lombard who was on a 20 fight win streak. Once again Boetsch managed to beat the odds and pulled off a Unanimous Decision victory.

Boetsch was supposed to face Chris Weidman at UFC 155 but Weidman had a shoulder injury so Boetsch instead faced off against Costa Philippou. In a back and forth battle, Boetsch would succumb near the end of the last round due to strikes after being badly beaten for the last half of the fight. This marked only the second time that he has lost via TKO in his career. He would look to get back on track when he fought Mark Munoz at UFC 162 but would lose a decision. He would get back in the win column with a decision victory over C.B. Dollaway in his next fight. He would then face Luke Rockhold at UFC 172 but would get caught in a Kimura in the very first round.

Boetsch would get back in the win column when he fought for the first time in his home state Maine. He faced Brad Tavares at UFC Fight Night 47 and after being dominated in the first round made an epic comeback in the second to finish Tavares by TKO sending the crowd into a frenzy and earning a Performance of the Night as well. Boetsch would drop his next fight to Thales Leites at UFC 183. Boetsch looked like he had Leites in a lot of trouble but would end up being submitted in the second round, he at least earned a Fight of the Night bonus for his effort.

Boetsch stepped back into the octagon, looked to beat one of the biggest names in MMA history - Dan Henderson. Things did not go to plan for Boetsch at UFC Fight Night 68: Boetsch vs. Henderson. He was rocked with a right hook, then took a knee to the body which caused him to stumble backwards, until finally being dropping by an uppercut. Referee John McCarthy, called a stop to the bout at 0:28 in Round 1. With this lost Boetsch's UFC record is 7-6.

Outside of the cage, he has a Criminal Justice degree from Lock Haven University. Before fighting full time, he was a social worker for adolescents. He and his wife have two children.