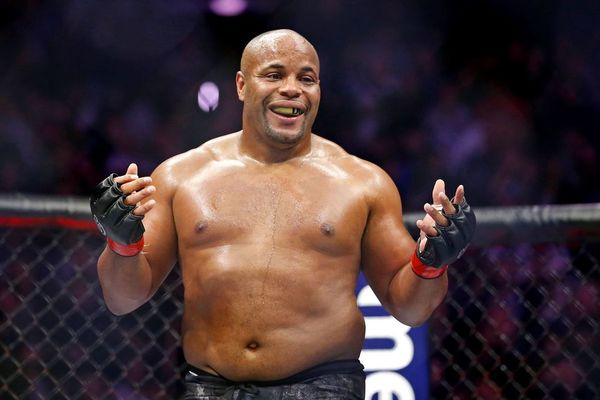 Daniel Cormier is ineligible for regional rankings due to inactivity.
Fighters must have at least one completed MMA bout in the past two years to be ranked.

Training  |  Daniel Cormier: I was put on Earth to Compete report dead link

Daniel Cormier is an American light heavyweight and heavyweight fighter currently signed to the UFC. He is a former Olympic wrestler, a brown belt in Brazilian Jiu Jitsu, and trains out of the American Kickboxing Academy in San Jose, California. He has previously fought for King of the Cage and Strikeforce where he was the Heavyweight Grand Prix champion. He has notable wins over Soa Palelei, Jeff Monson, Antonio Silva, Josh Barnett, Frank Mir, and Roy Nelson. Of his twenty-two career wins, seventeen have been finishes including ten T/KOs. He has previously held the UFC light heavyweight title and the UFC heavyweight title.

Daniel had a daughter who died in a car accident in 2003. Cormier has a son and daughter with his girlfriend.  He had stated on numerous occasions that he would drop to the light heavyweight division before he would fight his friend and AKA teammate Cain Velasquez, who was the UFC Heavyweight Champion. He made good on his promise and debuted at light heavyweight at UFC 170.  In his MMA career, he has broken his hand in three separate fights against Palelei, Silva and Barnett. When he won the heavyweight title from Stipe Miocic, he re-injured his hand. Cormier is an analyst for the UFC on the FOX stations.

Cormier was a three-time Louisiana state champion wrestler in high school. After his freshman year, he suffered only two losses the rest of his high school career, both due to injury. He finished high school at 101-9 and was also an all-state selection in football.

After high school, DC attended Colby Community College where he was a 2-time national champion. He left Colby and enrolled at wrestling powerhouse, Oklahoma State, where he would be the NCAA runner up, losing only to Cael Sanderson who was a future Olympic gold medalist. At Oklahoma State, Cormier graduated with a degree in Sociology.

After college, Daniel was on five United States wrestling teams including the 2004 and 2008 Olympic teams. At the 2004 Olympics in Athens, Cormier lost in the semi-finals to eventual gold medalist Khadjimourat Gatsalov and ended up fourth, just off the podium. In 2008, Cormier was named the USA team captain, but was not able to compete due to kidney failure. He won gold in the 2002 Pan American Championships and the 2003 Pan American Games. He also took bronze in the 2007 Pan American Games as well as a bronze in the 2007 World Championships.

His impressive performances earned him a spot as an alternate in the Strikeforce Grand Prix. He took on long time MMA veteran, Jeff Monson, in the alternate bout and was able to pick up another unanimous decision. Three months later, Cormier was tapped to replace Alistair Overeem in the semi-finals against Antonio Silva after Overeem had to withdraw due to injury. He would beat Silva with a first round knockout to advance to the finals where he would meet Josh Barnett. On May 19th, 2012, he would dominate Barnett and win a unanimous decision (50-45, 50-45, 49-46) to become the Strikeforce Heavyweight Grand Prix Champion.  He took on Dion Staring at the final event for Strikeforce on January 12, 2013. Although Staring was vastly outmatched, he was able to make it to the second round before losing via TKO. With this win being Strikeforce's final show, the 11-0 Cormier signed a contract with the UFC.

Cormier would make his UFC debut at UFC on Fox 7 against Frank Mir as the co main event on the card. He would keep his win streak alive defeating the former UFC champion by a unanimous decision. He next took on Roy Nelson in the co main event of UFC 166. DC was able to utilize his wrestling to nullify Nelson's right hand and was able to pick up another unanimous decision victory. Both fighters had stated that they intend to drop to light heavyweight after this fight. Cormier made good on his intentions and made his light heavyweight debut against Pat Cummins as the co main event fight of UFC 170. He was originally slated to take on fellow FOX analyst, Rashad Evans, but Evans had to withdraw from the fight ten days before had due to a leg injury. Cummins was a former training partner of Cormier when he was training for the Olympics and jumped at the chance to replace Evans when it was announced that DC was without an opponent. Before their fight, Cummins had only four professional fights. It took DC less than eighty seconds to dismantle his opponent who he finished by TKO.

Cormier was then set to face a true MMA and UFC veteran and fellow Olympian Dan Henderson, whose career was rejuvenated after scoring a come from behind KO victory over Mauricio "Shogun" Rua. The bout would take place at UFC 173, and Cormier would go on to win in dominant fashion via 3rd round RNC.

Following his victory against Dan Henderson, Cormier would go on to call out light-heavyweight champion, Jon Jones. Cormier would be granted his wish for a title shot against Jones, and the bout was set for UFC 178 in September of 2014. During a pre-fight press conference at the MGM Grand, Cormier and Jones engaged in an altercation which resulted in reporter Jon Anik to be pushed through a UFC 178 promotional poster and a brawl would ensue before Jones and Cormier would be separated. After separation, Cormier would accidentally hit a female reporter with a shoe he had intended to hit Jones with. Following the brawl, Jones and Cormier would engage in a verbal fight during a live interview with ESPN. On August 12, 2014 Jones would suffer a leg injury ultimately postponing the UFC 178 bout back to UFC 182 in January of 2015.

At UFC 182, Jones defeated Cormier via unanimous decision. This was also the first instance of Cormier being taken down in an MMA fight. Jones was involved in a hit-and-run incident, and stripped of the title. This gave Cormier an opportunity to fight for the now vacant belt, in a bout against Anthony Johnson. Cormier defeated Johnson via rear naked choke to become the UFC light heayweight champion.

Finally, the rematch with Jones happened at UFC 214 on July 29th, 2017. Jones kicked Cormier in the head, and after tripping Cormier, followed up with strikes on the ground to become UFC light heavyweight champion. After the fight it was announced that Jones had tested positive for the anabolic steroid Turinabol, and Cormier was reinstated as champion after the fight was overturned to a no-contest.

Cormier defended his belt against Volkan Oezdemir at UFC 220. He finished Oezdemir in the 2nd round, winning a Performance of the Night bonus.

Daniel Cormier moved up in weight and faced then reigning heavyweight champion Stipe Miocic at UFC 226. DC knocked Miocic out in the first round, becoming one of only two UFC fighters to hold two belts simultaneously. Cormier defended the heavyweight belt against Derrick Lewis at UFC 230, making him the first UFC fighter to defend both the light heavyweight and heavyweight title.