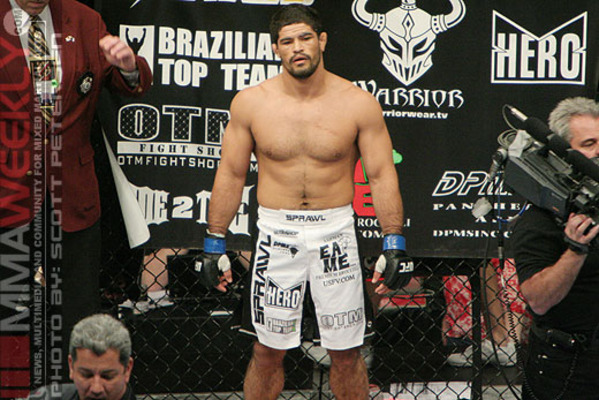 #38
Greatest MMA Grappler of All Time

Rousimar Palhares is a grappler who trains out of Team Nogueira and Brazilian Top Team. He is a black belt in Brazilian Jui Jitsu under former UFC Middleweight champion, Murilo Bustamante, as well as a black belt in Luta Livre, a form of submission wrestling. Of his 14 wins, 11 have been finishes with 10 submissions. He has never been submitted in an MMA fight. He has won Submission of the night honors twice in his career. He has been suspended two times while in the UFC. The first time, he held a heel hook after the referee stopped the fight against Tomasz Drwal which resulted in a 90 day suspension. He was also given a 9 month suspension following his loss to Hector Lombard for elevated testosterone levels. His nickname "toquinho" means little tree stump in Portuguese, a reference to his short, stocky frame.

After compiling a respectable professional record of 7-1 and winning the Fury FC Middleweight Championship in 2007 while fighting in his native country of Brazil, Rousimar Palhares was invited to join the UFC. After winning his debut fight with the promotion by submitting respected veteran Ivan Salaverry with an armbar in the first round, Palhares was matched up with MMA legend Dan Henderson in his sophomore effort inside the Octagon. After dropping a decision to Henderson, Palhares defeated Jeremy Horn, Lucio Linhares, and Tomasz Drwal in three consecutive bouts to reemerge as one of the most dangerous contenders in the division.

In addition to his stocky build and reportedly monstrous power, which makes it difficult for taller and lankier opponents to control him on the ground or to find their proper range on the feet, Palhares is a notoriously aggressive submission fighter, having defeated nearly half of his professional opponents with crushing leg locks.

Palhares would suffer his second UFC setback to former title challenger Nate Marquardt. During the match he was complaining to the ref that he thought Marquardt's leg was greased because he couldn't hold onto the leg lock. Marquardt took advantage and was able to ground and pound for the finish. He would win his next match with a kneebar over David Branch before another weird incident in the octagon. Palhares was facing Dan Miller and he thought the fight was over after he had hurt Miller with a high kick and was pounding away with strikes so he ran up and jumped on top of the cage in celebration. However Miller was still intelligently defending himself and referee Herb Dean never called an end to the fight so Palhares and Miller had to restart standing up. It was a strange moment and Miller was almost able to turn the match around but in the end Palhares took home a unanimous decision victory.

Rousimar's next fight would see him take out Mike Massenzio with a first round heel hook Submission of the Night victory. His next matchup was against Alan Belcher. Palhares ended up getting the fight on the ground where he wanted it and began chasing the leg lock. However, Belcher was able to battle through it and end up on top to rain down some heavy blows that put Palhares out handing him his 3rd loss in the octagon. Palhares would have his next bout on December 14, 2012 at UFC on FX 6 where he faced former Bellator Middleweight champion, Hector Lombard. Palhares would lose the bout via first round KO. This would be the first time in his career that he would suffer consecutive losses.

Palhares took on Mike Pierce in his welterweight debut at UFC Fight Night 29. He was able to finish the fight in just 31 seconds with a heel hook. The win was controversial since it appeared that he held onto the submission for a couple of seconds after the referee attempted to stop the fight. Due to his long history of rule infractions, he was released from the UFC, but was picked up by the World Series of Fighting shortly after with the understanding that his job depended on him not having any more run ins with the rules.

Palhares would receive an immediate title shot against champ Steve Carl at WSOF 9 where he would claim the belt and one more victim on his list of heel hook finishes. He would then be scheduled to face Jon Fitch a few times with the fight never materializing due to injury. He was finally slated to face Fitch at WSOF 16 for his first title defense. The fight was fairly quick with it ending in the first round due to Rousimar securing a tap out due to knee bar. Palhares is expected to face the winner of Jake Shields and Brian Foster for his second title defense.