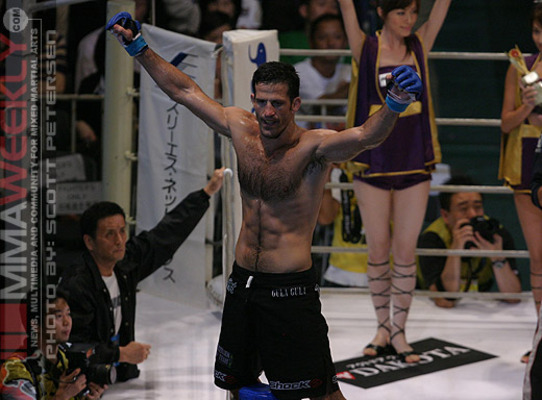 #51
Greatest MMA Grappler of All Time

Murilo Bustamante is ineligible for regional rankings due to inactivity.
Fighters must have at least one completed MMA bout in the past two years to be ranked.

A CBJJ World Champion in Brazilian Jiu-Jitsu and a black belt under the legendary Carlson Gracie, Murilo Bustamante began fighting professionally long before the modern mixed martial arts era had begun. His professional debut coming in 1991, Bustamante went unbeaten in his first eight bouts before losing the first fight of his career to future UFC Hall of Famer Chuck Liddell in 2001. Following the loss to Liddell, Bustamante won the UFC Middleweight Championship by defeating Dave Menne, defending it once against Matt Lindland before vacating the title to sign with the Japan-based Pride Fighting Championships in 2002.

During his Pride career, Bustamante fought some of the most accomplished middleweight and light heavyweight fighters in the world before they were stars, including Quinton “Rampage” Jackson and Dan Henderson (twice).

Bustamante retired in 2007 following his seventh career loss, but announced his return to active competition in 2010 after signing with Impact Fighting Championships. He lost his return bout via second round knockout. Bustamante is a respected Jiu-Jitsu and MMA coach, and at his peak was considered one of the world’s very best fighters.