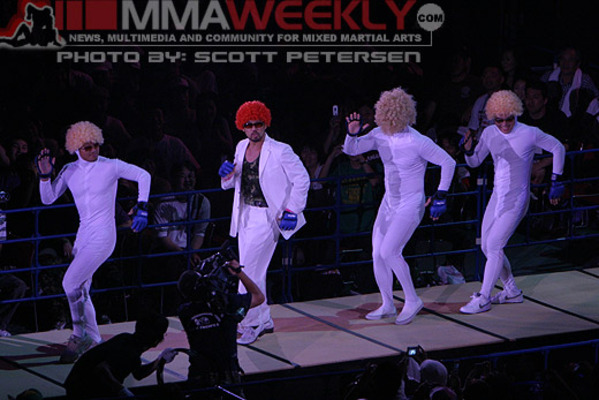 Akihiro Gono is ineligible for regional rankings due to inactivity.
Fighters must have at least one completed MMA bout in the past two years to be ranked.

Though he did not reach the highest pinnacles of the sport, Akihiro Gono, sometimes referred to as “The Japanese Sensation,” holds career victories over some of its best fighters, including Hector Lombard, Gegard Mousasi, and Hayato Sakurai. Since turning professional in 1994, Gono has grown into one of the most experienced and respected Japanese fighters in the world, gaining widespread admiration for his willingness to take fights with much larger men, including Matt Hughes, Murilo Rua, Chael Sonnen, Mauricio Rua, and Dan Henderson.

In addition to his abilities inside the cage, Gono is best known for his exotic ring entrances, often coming out with a choreographed dance routine and usually sporting a fake Afro. During his career, Gono has competed for the best mixed martial arts promotions in history, including Pride FC and the UFC. He was released from the UFC in 2009 following a string of losses to tough opposition, but was soon picked up by Sengoku, where he became a regular participant.

On May 4, 2012 after suffering defeat at the hands of Michael Chandler at a Bellator event, Gono announced his retirement from the sport at the post-fight press conference. Gono would return however at Deep: 62 Impact to face Taisuke Okuno. He would lose by KO/TKO in the 2nd round.

Following his defeat to Okuno, Gono next competed against Yuki Okano at DEEP: 62nd Impact on April 26, 2013. The bout would go the distance and end in a split draw.