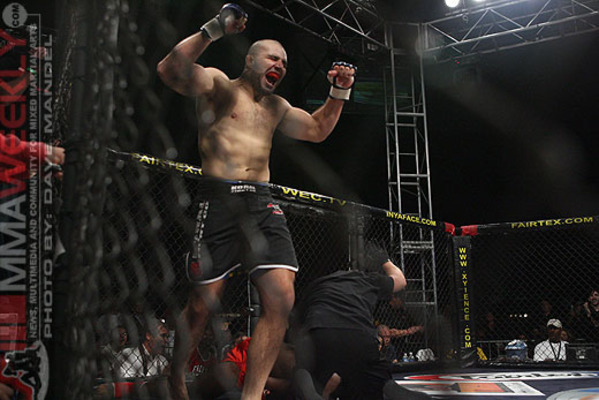 Fighting for a major organization has made Glover Teixeira ineligible for regional rankings.

Teixeira is a Brazilian Jiu-Jitsu Black Belt under Luigi Mondelli. Teixeira currently trains and instructs at The Pit with instructor John Hackleman, former UFC light heavyweight champion Chuck Liddell, and also with UFC, WEC veteran and current DREAM fighter Antonio Banuelos. His background includes a variety of grappling and MMA tournaments: Grappler's Quest, NAGA, Sport Fight (where he was the light heavyweight champion). Under submission wrestling rules, he grappled well known fighters Jeff Monson and Brandon Vera. He won the 2009 Brazilian ADCC trials in the under 99 kg division and in the 2011 Brazilian ADCC trials he took the second place. Teixeira defeated future UFC and PRIDE veteran Rameau Thierry Sokoudjou by KO on October 12, 2006 at WEC 24. Teixeira was featured in the second season opening episode of the MMA reality television series TapouT.

At UFC 146, Teixeira made his highly anticipated debut against Kyle Kingsbury. Teixeira put on a dominant performance en route to a 1st round submission victory at 1:53 into the fight. Due to the imposing nature of this showcase, many fighters have been apprehensive with regards to accepting a match up with the aforementioned Teixeira. Originally, his next bout was scheduled to be against former UFC Light Heavyweight Champion Quinton "Rampage" Jackson. However, Jackson pulled out of the fight with an injury and he was replaced by Fabio Maldonado. Before he was slated to fight Maldonado, there were several reports that former UFC Light Heavyweight Champions Mauricio Shogun Rua and Rashad Evans had turned down the proposed opponent. Teixeira would go on to defeat Maldonado in vicious fashion with a TKO coming by way of a doctor's stoppage following the conclusion of the 2nd round.

Glover's next fight would come against former UFC Light Heavyweight Champion, Quinton "Rampage" Jackson on UFC on FOX 6. Teixeira would go on to win by unanimous decision. He would keep his winning streak alive when he defeated James Te Huna at UFC 160 winning the Submission of the Night in the process for his first round finish. At UFC Fight Night 28, Teixeira would go on to defeat Ryan Bader by first round knockout en route to extending his win streak to 20 fights.

Texeira's winning streak would end when he faced Jon Jones for the UFC Light Heavyweight Championship at UFC 172. Texeira was unable to mount any significant offense against Jones and lost the title bout by unanimous decision.

Teixeira was expected to face Rashad Evanson 22 February 2015 at UFC Fight Night 61. However, on 7 January, Teixeira pulled out of the bout citing a knee injury that he had sustained in his last fight was slow to heal.

Teixeira was expected to face Alexander Gustafsson on 20 June 2015 at UFC Fight Night 69. However, it was announced on 1 May that Gustafsson had been removed from the card due to injury.

Teixeira faced Ovince Saint Preux on 8 August 2015 in the main event at UFC Fight Night 73. Teixeira won via submission in the third round. He was also awared his first Fight of the Night bonus award.

Teixeira faced Patrick Cummins on 7 November 2015 at UFC Fight Night 77. He won the fight via TKO in the second round.

Teixeira faced Rashad Evans on 16 April 2016 at UFC on Fox 19. He won the fight via knockout in the first round and was awarded a Performance of the Night bonus.

Teixeira was expected to face Anthony Johnson on 23 July 2016 at UFC on Fox 20. However, Johnson pulled out of the bout to tend to personal issues. The bout was rescheduled and eventually took place at UFC 202. Johnson defeated Teixeira by knockout in the opening seconds of the fight.

Teixeira faced Jared Cannonier on 11 February 2017 at UFC 208. He won the fight by unanimous decision.

A rescheduled fight with Alexander Gustafsson eventually took place on 28 May 2017 in the main event at UFC Fight Night 109. Teixeira lost the fight via knockout in the fifth round. Despite the loss, the bout earned Teixeira his second Fight of the Nightbonus award.

Teixeira was scheduled to face Misha Cirkunov on 28 October 2017 at UFC Fight Night 119. However, the pairing was delayed after a recent hand surgery for Teixeira was slow to heal and the bout eventually took place on 16 December 2017 at UFC on Fox 26. Teixeira won the fight via TKO in the first round.

Teixeira was briefly linked to a bout with Volkan Oezdemir on 12 May 2018 at UFC 224. However, Oezdemir was pulled from that pairing in favor of a matchup with Maurício Rua at UFC Fight Night 134.

Teixeira was expected to face Ilir Latifi on 22 July 2018 at UFC Fight Night 134. However, on 5 July 2018, it was announced that Latifi was pulled from the event, citing injury. Latifi was replaced by Corey Anderson. He lost the fight via unanimous decision.

Teixeira was expected to face Jimi Manuwa on 22 September 2018 at UFC Fight Night 137. However, Teixeira suffered an injury in August and was removed from the match-up.

Teixeira was scheduled to face Ion Cuțelabaon 19 January 2019 at UFC on ESPN+ 1. However, on 10 January 2019, Cutelaba was pulled out of the bout due to injury. After seeking a replacment for Cuțelaba, the UFC announced that Karl Roberson was stepping up to face Teixeira. Teixeira defeated Roberson by submission via arm triangle choke in the first round.

Teixeira eventually faced Cuțelaba at UFC Fight Night: Jacaré vs. Hermansson on April 27, 2019. He won the fight via submission via a rear-naked choke submission in the second round. The win also earned Teixeira his second Performance of the Night bonus award.