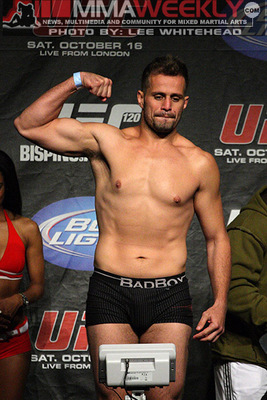 The Sorocaba Fabio Maldonado began his career in the fight game in 1997 amateur boxing. In five years as an amateur, Maldonado amassed a respected cartel of 40 wins in 45 fights, 27 by knockout, becoming champion of the major tournaments such as the Forge of champions, Gold Gloves Championship, as well as others. In 2002, along with his coach at the time, Lucas France, the he decided to migrate to professional boxing where he is still undefeated with 21 knockouts in 22 fights. In MMA, his history began even before becoming a professional boxer. In 2000, debuted at a Grand Prix in Brasilia having three fights in one night. Four years later, he met brothers Rodrigo Minotauro and Rogério Nogueira, and began training in Rio de Janeiro.

His MMA career started on the regional circuit in Brazil in 2000 with most of his fights coming after 2007. He amassed a 17-3 record with his wins predominantly coming via t/ko. He made his UFC debut against journeyman James McSweeney at UFC 120 where he won via TKO.

His next fight was a very hard fought decision loss to Kyle Kingsbury. Maldonado was able to demonstrate and ability to take damage without missing a beat. He also demonstrated so excellent groundwork against the wrestler Kingsbury. Ultimately the judges all saw it as 29-28 for Kingsbury, although both fighters did receive a $40,000 bonus for Fight of the Night.

The next fight was another barn-burner against Igor Pokrajac. Maldonado demonstrated good takedown defense and was able to keep the fight standing for the majority of the time. The decision went to Pokrajac in the end but Maldonado showed excellent heart throughout. This fight is currently ranked as the #8 best fight of 2012.

He took on Glover Teixeira on short notice filling in for the injured Quinton "Rampage" Jackson at UFC 153. He suffered another setback to the rising star and fellow hard hitting Brazilian. During the fight Maldonado absorbed 117 hard shots from Teixiera in two rounds before the doctor stopped the fight before the start of the final round. UFC president Dana White was quoted saying "If we cut that guy, we deserve to be beat with a stick" during the press conference following the event.

Fabio next took on Roger Hollett in Brazil and was able to secure a unanimous decision victory. This was the first decision that he had won in over four years. He took on Joey Beltran at UFC Fight Night 29 in what many thought would be another knock down, drag out, brawl. The fight did not live up to expectations however but Fabio was able to pick up a controversial soil decision win. He would rattle off two more wins with decisions over Joey Beltran and Gian Villante.