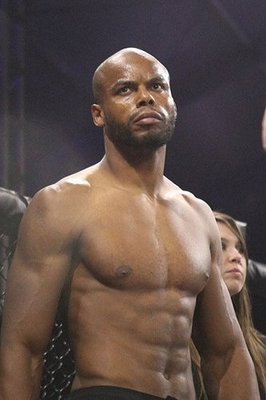 Christian M'Pumbu is ineligible for regional rankings due to inactivity.
Fighters must have at least one completed MMA bout in the past two years to be ranked.

Christian M'Pumbu is a former heavyweight and current light-heavyweight fighting in Bellator with a record of 18-5-1. Fighting most of his early career in Europe with M1 and Star of Peresvit he picked up a win over Stefan Struve. M'Pumbu entered the Bellator Inaugural Light Heavyweight Tournament against Chris Davis winning by 3rd round TKO, then fighting Tim Carpenter and Richard Hale whom he would beat by 1st and 3rd round TKO. M'Pumbu was crowned the first Bellator Light-heavyweight champion after beating Hale and was scheduled for a non-title fight against the veteran Travis Wiuff at Bellator 55 where he would lose a Unanimous decision. M'Pumbu would then wait fight again at Bellator 91 losing a 5 round Unanimous decision to Atila Vegh. M'Pumbu had a 1 year and 8 month lay-off in between the Wiuff and Vegh fight.