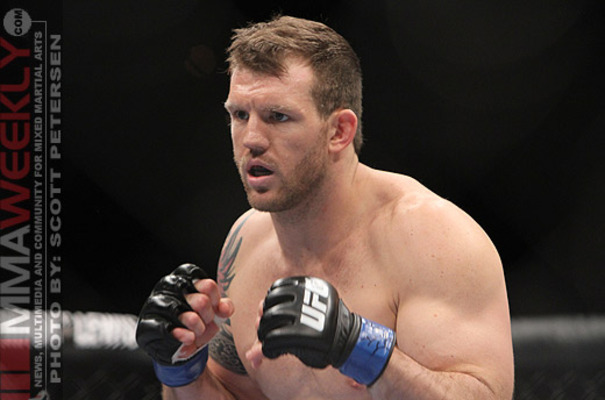 Fighting for a major organization has made Ryan Bader ineligible for regional rankings.

Prior to entering the world of professional mixed martial arts, Ryan Bader had a successful amateur wrestling career, having been a multi-time PAC 10 Champion and a two-time D1 All American out of Arizona State University. Bader made his professional MMA debut in 2007, running his record to an impressive 7-0 mark before participating in and winning The Ultimate Fighter 8 Light Heavyweight Tournament, defeating respected BJJ black belt Vinny Magalhaes in the finals by knockout. Since defeating Magalhaes, Bader has established himself as a contender to watch in the stacked 205 lb. division, with dominant victories over Carmelo Marrero, Eric Schafer, and Keith Jardine.

In 2010, Bader, along with teammates Aaron Simpson and C.B. Dolloway, left Arizona Combat Sports to train at the Lion’s Den in Scottsdale, Arizona, in an effort to elevate their game to new heights. After suffering his first professional loss at the hands of future UFC light heavyweight champion Jon "Bones" Jones in 2011, Bader went on to rebound with consecutive victories over Jason Brilz and Rampage Jackson before a KO loss to former UFC light heavyweight champion Lyoto Machida.

Bader would rebound from the devastating Machida loss by securing a win over MMA veteran Vladimir Matyushenko at 'UFC on FOX 6'. In this fight he would set a record for the fastest submission victory ever in the UFCs Light Heavyweight division, sinking in a modified guillotine choke just 50 seconds into the first round. He would win the fight, set the record, and get his first ever submission of the night bonus.

Bader's next fight would come at UFC Fight Night 28 against the highly touted Glover Teixeira, who had come into the bout unbeaten in his last 19 fights. He would lose the fight via first round TKO. It would be the second time Bader had been stopped by strikes in his last 3 fights.

With his lose to Tiexeira behind him Bader would go on a 4 fight win streak, all coming way of decision. He faced grappling superstar Anthony Perosh, at UFC Fight Night 33: Hunt vs. Bigfoot. Then former Strikeforce LHW Champion Rafael Cavalcante, at UFC 174: Johnson vs. Bagautinov. Next Bader was the main event with Ovince St. Preux, in a five round fight, at UFC Fight Night 47: Bader vs. St. Preux.

Bader's most notable win during this streak came at UFC on FOX 14: Gustafsson vs. Johnson, when he faced a man who beat him during his collegiate wrestling days - Phil Davis. In what was a lackluster performance from both fighter, Bader won via Split Decision.

Episode 2 Bader def. Kyle Kingsbury by Arm Triangle at 1:33 of Round 2

The Ultimate Fighter 8 Finale Bader def. Vinny Magalhaes by TKO at 2:18 of Round 1

He won the fight by TKO in the second round successfully defending his belt and becoming undisputed champion.

On may 12th 2018 Bader faught In the first round of the bellator heavyweight grande prix tournament.

The fight was against Muhammed Lawal. Bader won the fight by ko In fifteen seconds of round one.

In the semi finals of the tournament Bader took on Matt Mitrione and won the fight by unanimous decision securing his spot in the finals.

On Saturday January 26 Ryan "Darth" Bader faced "The Last Emperor" Fedor Emilianenko in the grande prix finals. Bader won the fight with a lead left hook followed by ground and pound at thirty five seconds of round 1 and became The bellator double champ holding both heavyweight and light heavyweight championship belts.