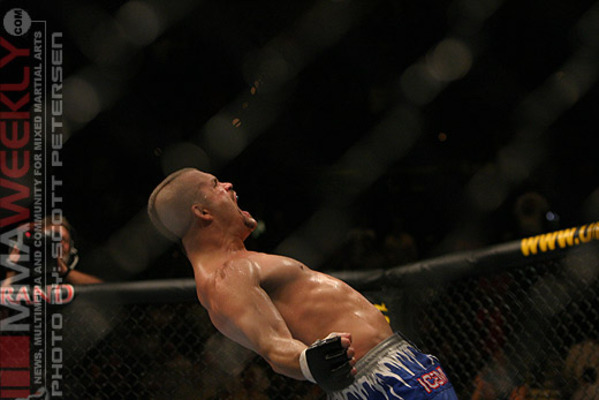 Chuck Liddell is ineligible for regional rankings due to inactivity.
Fighters must have at least one completed MMA bout in the past two years to be ranked.

One of the longest reigning UFC Light Heavyweight Champions in history and MMA's first true crossover superstar, the legendary Chuck “The Iceman” Liddell's extraordinary UFC career spanned all the way from UFC 17: Redemption in 1998, where he made his professional debut, through UFC 115 in 2010, where he fought his last battle in the Octagon.

Liddell began his martial arts journey at the age of 12 in the discipline of Koei-Kan karate, and went on to excel at Kenpo, freestyle wrestling and kickboxing. Upon entering the pro MMA circuit, "The Iceman" notched impressive victories over a laundry list of top contenders, including Jeff Monson, Kevin Randleman, Guy Mezger, Murilo Bustamante, and Renato “Babalu” Sobral -- all before he ever took the Light Heavyweight Championship.

After finally wresting the title from Randy Couture at UFC 52 in 2005, Liddell entered his prime. He reeled off one of the most dominant winning streaks of any fighter in MMA history, defeating Couture (again), Jeremy Horn, Sobral (again), and former champion Tito Ortiz, all by KO or TKO. Liddell ultimately defended his title four times before losing it in 2007 to Pride import Quinton “Rampage” Jackson. During that legendary run, each of Liddell's knockout wins came to seem more inevitable than the last. His fame skyrocketed as he repeatedly delivered on the substantial hype the UFC was placing upon him. Liddell could sell out a major Las Vegas fight card virtually on his own, and as he would make his way inside the cage for a main event, audiences would crackle with an electricity not witnessed for a prize fighter since Mike Tyson.

Liddell's success also played a key role in the meteoric growth of the UFC at that time. He proved to be the perfect flag bearer for the moment, combining his in cage ferocity with a distinctive Mohawked appearance, a mellow, laid back surfer attitude, and memorable personality quirks like a miniature designer dog and a penchant for drinking straight hot sauce out of the bottle while cutting weight in preparation for his fights. It was also around this time that rumors first began to percolate about Liddell's love for partying late into the night, a lifestyle which may have ultimately hastened the end of his pro career.

A former Division I collegiate wrestler, Liddell built his success on a pioneering fighting style. He drew upon his wrestling pedigree not to proactively wrestle, but to stop wrestlers from imposing their gameplans. He utilized top-level takedown defense to maintain standup contests, where more often than not he would finish his opponents with a heavy barrage of strikes. On the rare occasions Liddell was taken down, he possessed an uncanny ability to stand back up, usually immediately, and return to headhunting. Liddell was also distinguished by his ability to knock opponents unconscious while backpedaling, a feat he accomplished against Sobral, Couture, Vernon White, and others throughout his career prime. This began the "sprawl and brawl" style as it is often referred to today.

On July 10, 2009, at the UFC 100 Fan Expo in Las Vegas, Nevada, Liddell became the sixth inductee of the UFC Hall of Fame, joining Royce Gracie, Dan Severn, Randy "The Natural" Couture, Mark Coleman, Ken Shamrock, and TapouT apparel co-founder Charles “Mask” Lewis in the illustrious category. Along with his standing as a dominant striker, Liddell will be remembered as the first MMA fighter to achieve widespread celebrity status outside the cage, having appeared in popular television series' such as HBO’s “Entourage,” MTV’s “Punk’d,” and network television’s “Dancing With The Stars.” In late December 2010, Chuck Liddell and the UFC jointly announced Liddell's official retirement from the sport of MMA. Liddell would remain on board with the UFC as an Executive Vice President of Business Development.

Fighters Only Magazine discussed retirement with Chuck Liddell in this video.